In Argentina, the Valdivian Forest constitutes the last remnants towards the east of the temperate rainforests of Chile and Argentina, covering approximately 2,330,000 ha of the eastern slope of the North Patagonian Andes. 57% of these forest areas fall within the area of the Biosphere Reserve. These large areas are destined for the conservation, with a high degree of ecological integrity and habitat connectivity.

Its mission is to maintain and sustain in the long term the integrity and functionality of the Valdivian Eco-region's environments at a landscape scale, consolidating a sustainable use of the resources inside and outside the protected areas with equity, active social participation, respect for cultural diversity and strengthening among the organizations that administer the territory.

The Andino Norpatagónica Biosphere Reserve comprises a narrow strip of high mountain environments, temperate forests, grasslands and sub-Andean steppes, which constitute one of the most important remnants of well-conserved temperate forests on the planet.

These environments play a key role in the protection of high basins, define the eastern end of the distribution of many of the most representative species of the Ecoregion (Nothofagus, Fitzroya, Austrocedrus, Araucaria), having constituted refuges during the last glaciation, and maintain an area of great environmental integrity and key importance for the conservation of the same as a whole; as well as the genetic variability of many of its relevant species. 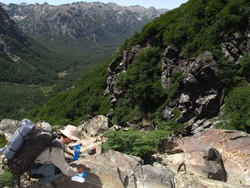 The area has been occupied for the last 10,000 years. More than 235 archaeological and historical sites have been identified in the biosphere reserve. It provides unique archaeological evidence to understand the region's past linked to the settlement in forested areas and the relationships, communication networks and alliances maintained between the populations of the Pacific slope (E-W axis), with the populations that settled along the mountain range (N-S axis) at different historical moments.

Currently, it is estimated that more than 300,000 people live around the biosphere reserve in cities, towns, and villages. Tourism, based on the scenic beauty and the high overall environmental integrity of the area, has become a strong economic engine for the corridor, diversifying agricultural production and sustainable management of forest communities.

Both Mapuche and Creole communities living in different areas of the biosphere reserve have a wide diversity of traditional and innovative cultural practices in rural, forest and ecotonal settings that reflect the environmental and spiritual values they seek to conserve, preserve and protect; as well as territorial identities and diverse forms of organization throughout the territory.