Formerly known as Beinn Eighe, Wester Ross biosphere reserve is situated in the northwest of Scotland. It displays a suite of habitats primarily influenced by upland and oceanic factors. Most of Wester Ross is covered by open heathland, bare rock, scree, and wet grassland with scattered bogs and peat lands. Of national interest are two variants of dwarf shrub heath and a western variant of moss heath. The woodland, which is found below 300m close to Loch Maree and in various isolated gorges, includes the best remaining examples of western pinewood in Britain, and also contains birch, holly, ivy, rowan, oak and juniper. 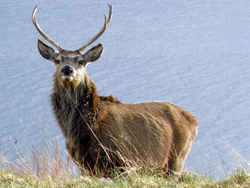 Wester Ross is dominated by wild, rugged mountains, remote glens and long, steep sided straths (valleys), which extend down to the sea. The area is characterised by isolated mountains like Ben Mor Coigach, An Teallach, Slioch and Beinn Eighe, and fast-flowing rivers that empty into sheltered bays and sea lochs (inlets). The indented coastline is long, varied and beautiful, ranging from exposed headlands to well sheltered sea lochs.

The open coasts of Wester Ross are partly sheltered by the islands of Raasay and Skye in the south, and the island chain of the Western Isles across the Minch. The seashores are predominantly rocky, covered with barnacles and seaweeds. An offshore rock in Outer Loch Torridon is the northern-recorded limit for the spongy green seaweed, Codium adhaerens. Crofter’s wig Ascophyllum nodosum ecad mackaiiis a very distinctive form of the common egg or knotted wrack, which lives unattached on the shore in very sheltered corners. This endemic seaweed is only found in west coast sea lochs and nowhere else in the world.

It is home to the largest remnant of ancient Caledonian forest in Wester Ross; some of the Scots pine trees are some 400 years old. Its rugged slopes support one of the UK’s best tracts of prostrate juniper and moss heath.

Rare lichens, liverworts and mosses flourish, from the mild, damp woodlands up to the highest peaks. Below the tree line, pine marten (Martes martes), Scottish crossbill and northern emerald dragonfly make their home in the ancient pinewoods, whilst otters and black-throated divers can be seen where the slopes meet the waters of Loch Maree.The red deer (Cervus elaphus) is the largest native land mammal in the UK and is found predominantly in open moorland habitats, characteristic of much of upland Scotland, as well as using woodlands and plantations, particularly for shelter. 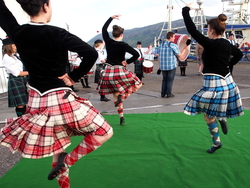 The Biosphere Reserve is home to approximately just over 8,000 people. Scottish Gaelic is listed as ‘definitely endangered’ in the UNESCO Atlas of Endangered Languages. In Wester Ross, 10.6% of the population are able to speak Scottish Gaelic. Main economic activities include tourism, agriculture, forestry and fishing.

The area is a destination for approximately 450,000 visitors each year, attracted to the vast areas of highquality natural landscape, contemporary culture and rich cultural heritage, which includes a range of Neolithic archaeological sites as well as traditional activities that are still practiced today, such as crofting and Gaelic music.