Waterton Biosphere Reserve is situated in the extreme southwest of the Province of Alberta and encompasses some of the most spectacular and ecologically diverse landscapes in the Canadian Rocky Mountains and prairie grasslands. Glacier Biosphere Reserve is located in Montana, USA, immediately to the south or the area. The two biosphere reserves encompass the Waterton-Glacier International Peace Park (1932), designated as a UNESCO World Heritage Site in 1995, and are at the heart of the Crown of the Continent Ecosystem, an area internationally acclaimed as one of the largest remaining intact ecosystems in North America. The area is largely rural in character, with no major urban centres. 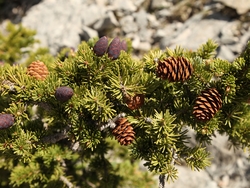 Alberta’s Rocky Mountain, Parkland and Grassland Natural Regions can all be found within Waterton Biosphere Reserve. The steep environmental gradients from the Continental Divide (2910 m) to the prairies (960 m), climatic influences of two opposing air mass systems (the Pacific Maritime and the Arctic Continental), and variable aspect provided by mountainous terrain, have created a rich mosaic of habitats with their associated flora and fauna. Several rare or threatened plant and animal species are found in Waterton Biosphere Reserve with more than 1000 vascular plant species, 182 bryophytes and 218 lichen species, 60 species of mammals, over 260 species of birds, 24 species of fish, and 10 reptiles and amphibians being recorded within the ecologically diverse core area.

Along the base of the mountains lies a narrow band of the Foothills Parkland Subregion with rough fescue (Festuca campestris) meadows intermingled with trembling aspen groves with a rich understory of shrubs and forbs. Further eastward the parkland transitions to the prairie grassland of the Foothills Fescue Subregion dominated by rough fescue, Parry’s oat grass (Danthonia parryi ), June grass (Koeleria macrantha) and wheat grasses (Agropyron spp.) with abundant forbs throughout and shrub communities found on north-facing slopes and in moist sites. On the eastern side of the biosphere, within the transition area, landscapes include non-native pastures and irrigated and non-irrigated cultivated agricultural lands interspersed with riparian corridors, wetlands, and blocks of native grassland. 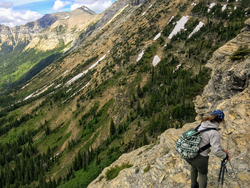 Waterton Biosphere Reserve has a population of 17,697 (2014 census) split almost evenly between rural (41%) and urban (59%) residences. Three towns, Cardston, Pincher Creek, and Magrath range from 2376 to 3619 people in size with several smaller villages and hamlets (from 10 to 287 people) scattered across the biosphere reserve. In the rural areas, the majority of people live at agricultural residences, with the remainder residing on acreages and small non-agricultural holdings.  Another 5000 to 8000 people live in the area on a seasonal basis. The main economic drivers for the region are agriculture, tourism and recreation, the energy industry and the accompanying service industries. Cattle ranching is the primary agricultural focus in the buffer zone with the emphasis shifting to include forage and grain crops in the transition area.  About 9% of the cropland in Waterton Biosphere Reserve is irrigated; in fact, the St. Mary Project started at Kimball in 1898 was the first irrigation project in Canada.

Tourism is growing in the region with Waterton Lakes National Parks drawing 477,000 visitors in 2015/16.  Continued growth of the tourism and recreation sector is anticipated with the expansion of the Castle Wildland Provincial Park and creation of Castle Provincial Park. Oil and gas, hydroelectric, and wind energy are all produced in Waterton Biosphere Reserve. Over the last two decades the wind energy industry has expanded with the first commercial windfarm in Canada being built in Waterton Biosphere Reserve in 1993.