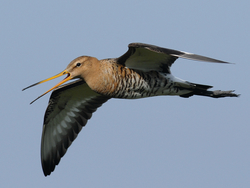 All typical habitats are almost completely integrated into the protected area. This also applies to the tidal channels and inlets near the coast, the eulittoral tidal flats, salt meadows, dune habitats and special biotopes such as the "Schwimmendes Moor" at the outer dike and the heath-covered cliff that represent a natural, undisturbed transition between land and sea. Large sections of this area are characterised by little or no human intervention. Around 45% can even develop freely as dynamic, self-organising ecosystems.

The other areas are subject to a degree of human intervention which includes coastal protection measures that limit the area's dynamics, (shrimp) fisheries and tourism. Management measures in the past few years have led to improved ecosystem protection more in line with sustainability principles.

Biomass is produced by bacteria, plant and animal species that, over the course of evolution have succeeded in adapting to the extreme ecological conditions of the tidal flats. The tidal flats are characterised by the high number of specialised animal and plant species with 10,000 different species on record in the Biosphere Reserve. Moreover, the Wadden Sea is of global significance for migratory bird species using the East Atlantic Flyway. 10-12 million waders and water birds use the Wadden Sea twice a year, 1-3 million of them in the Lower Saxony region. As the primary and often only stopover point, the Wadden Sea is essential for the birds to regain their energy and the ecological connectivity of the individual stations on the flyway makes the area essential for the survival and successful breeding of species several thousand kilometres away as well. 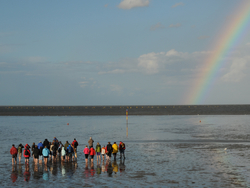 Major human activity is tourism. In the area there are also many visitor centers that inform tourists about the sensitive ecosystem of the Wadden Sea. To regulate new tourist activities such as kite surfing, zones within the Biosphere Reserve area have been designated, taking the protection and conservation goals into consideration, in order to confine such trend sports to specified areas. In addition, the Biosphere Reserve instrument facilitates the elaboration and implementation of concepts for sustainable, environment-friendly tourism.

In order to leave the salt meadows in the protected area to develop as naturally as possible, agricultural use of land owned by the state of Lower Saxony was gradually ceased or converted to extensive practices. This led to a land mix which is suited to achieving the conservation objectives of the Biosphere Reserve. The remaining privately owned land totalling around 8% (approx. 800 ha) is gradually being taken out of use or converted to extensive farming (e.g. grazing of the old German cattle breed Schwarzbuntes Niederungsrind). In cooperation with the catering sector and artisanal butchers, this beef is being marketed more and more within the region.