Located in the central part of Sweden, the Voxnadalen Biopshere Reserve encompasses the catchment of the River Voxnan. Extensive boreal woodlands cover much of its northwest while open farmland to be found in the more populated southeast. The site is also home to engineering, hydro energy and high tech companies and to 274 nationally endangered specifies of flora and fauna as well as 16 that are internationally threatened. Local authorities have introduced policies prioritizing the preservation of several species including wolves (Canis lupus) and wolverine (Gulo gulo), and their habitats. The site is notable for its Decorated Farmhouses of Hälsingland, inscribed on UNESCO’s World Heritage List in 2012. Thirteen-thousand people live in the site, which will seek to explore and demonstrate collaborative approaches to sustainable development on a regional scale. 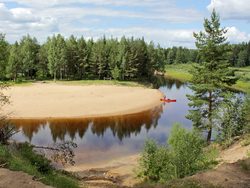 The planned biosphere reserve is situated in the region of the northern boreal needleleaf forests, in the border zone between the southern boreal zone, an area with low hills and river valleys, and the mid-boreal zone. The latter zone is typical of northern Sweden with high hills and undulating mountainous terrain with outcrops of primary rock. Due to the size (342,000 ha), topography (51-686 metres above sea level) and location of the area, it extends over four Swedish plant hardiness zones (zone IV-VII), which is a reason for the rich variation in the vegetation of the landscape.

Woodland covers 80-90% of the planned biosphere reserve, most of this is production forest. Coniferous trees such as pine (Pinus sylvestris) and spruce (Picea abies), and deciduous trees such as birch (Betula pendula, B. pubescens) aspen (Populus tremula), willow (Salix caprea), rowan (Sorbus aucuparia) and alder (Alnus incana) are the predominant tree speicies. Within the planned biosphere reserve, 274 species have been observed, which are nationally red-listed in ArtDatabanken (The Swedish Species Information Centre), and 16 species that are internationally red-listed in IUNC. 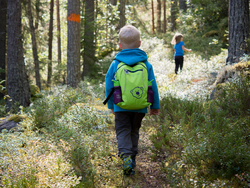 The population of the transition area is about 13,300. Most of the urban areas, with associated industry, are concentrated in the south-eastern part of the transition area. This includes the principal urban centres, Edsbyn and Alfta, which are the most heavily populated. The transition area also includes diverse ecosystems ranging from forest, grazing land and farmland to wetlands, lakes and watercourses, but also many historical buildings such as the Halsingland farmhouses and summer farms.

Tourism is very important for the area and primarily centres on the Decorated Farmhouses of Halsingland World Heritage Site and various types of outdoor, wildlife and cultural experiences.