The Region of Valles de Luna y Omaña is located in the north-west of the León Province in northern Spain, including the municipalities of Sena de Luna, Barrios de Luna, Soto y Amío, Murias de Paredes, Riello and Valdesamario. Altitudes of over 2,000 metres are reached in the south-west, in the mountainous complex of Sierra de la Cañada. Omaña is surrounded by mountain chains, which constitute the contact between the Cantabrian mountain range and the Montes de León. The region includes the Luna y Omaña Rivers that give rise to a succession of fertile valleys and narrow passages.

The regions of Omaña and Luna are the result of a farm system that was basically established during the Middle Ages and continued to be operational until the middle of last century. This system included, associated to each inhabited nucleus, land allocated to grasslands, woods to supply timber and croplands.

The high mountain landscapes in the extreme north, west and south of the Reserve are note worthy because of their high ecological value, in addition to the landscapes modelled by human and livestock activities, scattered all over Omaña.

In general the bird, mammal, amphibian and reptile communities are widely and richly represented.

The zone has considerable and interesting flora, with numerous species endemic to the Iberian Peninsula. It conserves samples of deciduous and marcescent forests in excellent condition.

To be noted are the Birch groves, considered to be unique in the Iberian Peninsula, the vast Quercus Pyrenaica groves and the presence of clumps of another recently described (2002) species of Oak (Quercusorocantabrica). Also of interest are the riparian forests, combined with traditional agro-systems in a mosaic of outstanding landscape and cultural value. 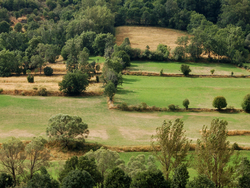 One of the main sources of economic development in the region is open range livestock-raising, together with domestic agriculture and incipient tourist activities.