The Urdaibai Biosphere Reserve is located in the Euro Siberian region, on the Bay of Biscay coast, in the north of the Iberian Peninsula. Urdaibai covers an area of 220 km2 with around 45.000 inhabitants, the 80% of them concentrated in the towns of Gernika and Bermeo. The territory is characterized by a hydrographic basin that ends creating a great salt marsh and a coastal landscape with high sheer cliffs and capes.

22 Municipalities have their territory in the Biosphere Reserve 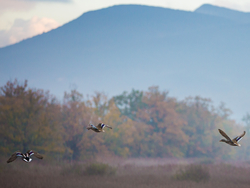 The Biosphere Reserve is located in a river basin draining into an estuary of the Cantabrian Sea, forming marshlandswith a wide, inter-tidal area, in a region with a temperate ocean climate.

The mean annual rainfall and temperature are 1,400 mm and 14ºC respectively. Natural vegetation is formed by a mosaic of lush forests, scrublands and moorlands, together with anthropic conifer vegetation, meadows and croplands.

It includes a varied zoological community, associated with the different environments. Urdubai, which means “River of the Boars” in Euskera, reflects the abundance of this animal. The marshlands are critical for bird life, both as a nesting area and as a stopping or winteringsite. The coastal wetlands are also a natural nursery of great importance for many marine species that spend their first years in this area. 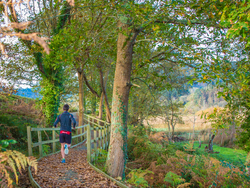 Besides its environmental wonders, Urdabai features a cultural, arquitectural and archeological heritage that is of high symbolic importance to the Basque people, such as Katillotxu and the Roman settlement of Forua. Gernika, made famous by the infamous bombing and Pablo Picasso's painting, is also located in the area.

Around 14% of the population makes a living out of the primary sector, mainly in farming, cattle-raising, forestry and fishing.