Las Ubiñas-La Mesa is located in the heart of the Cantabrian Range in the Principality of Asturias.  It encompasses old growth forest in pristine condition with high biodiversity.  The biosphere reserve could potentially play an important role in attracting or maintaining rural inhabitants. 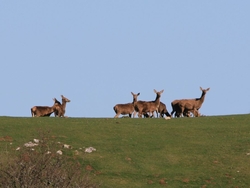 The complicated geomorphology of this area, the wide variety of lithological substrates and various human uses, have determined the existence of a large variety of vegetation and habitats that contain a significant species richness of flora and fauna. The area is not only rich in terms of number of different species but also in rare or threatened species.

Among the highly threatened plant species are the Centaura de Somiedo (Centaurium somedanum), which thrives on rocky limestone slopes, and the water-starwort (Callitriche palustris) found in some mountain lakes in the area of Quiros and Lena. Tree species with specific management plans for their conservation include yew (Taxus Bacata), holly (Ilex aquifolium), holm oak and subspecies (Quercus ilex L. and Quercus rotundifolia).

The biosphere reserve has 18 wildlife species that are protected at the regional level, which account for more than half those listed for the whole Asturian territory. The brown bear (Ursus arctos) and the Western Capercaillie (Tetrao urogallus) are flagship species of the Cantabrian Mountains and classified as endangered species both at a regional and national level; this area represents one of their last refuges. 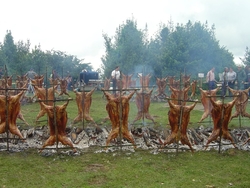 Although mining has played an important role in the economy and in the population structure of this area throughout human history, this industry has decreased in the last years. The service sector is nowadays the largest employer. The major agricultural activity in the area is beef cattle.