The Tuscan Islands Biosphere Reserve is an archipelago in the Tyrrhenian Sea composed of seven main islands and a few isolated islets. It encompasses a wide range of geological, geomorphological and biological diversity representative of the Mediterranean region. Islands are covered by sclerophyllous evergreen forest, Mediterranean pine woods, maquis, scrub, and hardwood forest with deciduous oaks and chestnuts.

The recent development of tourism has exerted enormous pressure on the natural environment. As a result, certain terrestrial and marine areas, and some islands, now form part of a protected national park established to conserve rare and endemic species.

More than 30,000 people live permanently in the archipelago (2014) who depend mainly on services related to tourism, with relatively little employment in agriculture and fisheries. Projects are planned to introduce renewable energy resources and innovations in the agricultural sector, and to enhance the availability of water by means of alternative technologies. Current research focuses on geology and geomorphology, coral and fish distribution, monitoring of seawater quality and the restoration of populations of rare species. 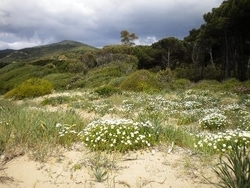 The Tuscan Islands Biosphere Reserve located between the Tuscan coast and Corsica consists of seven main islands (Gorgona, Capraia, Elba, Pianosa, Montecristo, Giglio and Giannutri) and a few smaller islands. The reserve encompasses a wide range of geological, geomorphological and biological diversity representative of the Mediterranean region, including an assortment of sedimentary, metamorphic and igneous rocks, and a wide variety of shapes and processes with distinguishing characteristics.

The main types of habitat are evergreen forests of sclerophyll, Mediterranean pine woods and Mediterranean scrubs, as well as chestnut and deciduous oak woods. Rare and endemic species on the islands include the Peregrine falcon (Falco peregrinus), the Mediterranean horseshoe bat (Rhinolophus euryale) and the critically endangered red-rumped swallow (Cecropis daurica). 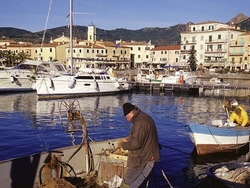 More than 30,000 people live permanently on the Tuscan Archipelago whose ethnic origins are unclear. From a historical point of view, the most important ethnic groups are the Italics and the Etruscans, with strong Greek, Roman and Longobardic influences.

Tourism is the main economic activity, linked principally to bathing, and is therefore concentrated during the summer season. Other economic activities include agriculture and fishing, although these have only a minor impact at the environmental and socio-economic level.

In terms of heritage, the Tuscan Islands Biosphere Reserve contains 30 prehistoric sites often situated in panoramic locations, numerous Etruscan sites connected to mining activities established in defensive positions, and a number of Roman finds linked to patrician villas. Outstanding examples include the Roman Villa of the Caves at Portoferraio, the areas of Monte Castello and Compo dell’Aia at Procchio, the Roman Villa at Cavo, the sites of Capel Rosso and Vigna Vecchia, the Roman ruins at the port of Giglio, the catacombs and the Villa of Agrippina on Pianosa.