This biosphere reserve is located about 550 km south of Moscow close to the Ukrainian border. Situated in the Pontian Steppe biogeographic region, the area comprises meadow steppes with a vast floristic diversity (up to 80 species per square meter). The Tsentral'nochernozem Biosphere Reserve takes its name from its soil type, the so- called ‘chernozem’, which is a black and very fertile soil. Today, pristine steppe ecosystems are rare since all major steppe zones of Europe and America’s prairies have been transformed into agricultural land due to its high productive soil. 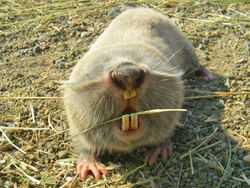 The biosphere reserve includes a mosaic of all natural ecosystems of Kursk region. Plakorny meadow, or northern steppes (Streletsky, Kazatsky) escaped only thanks to creation of the Reserve, they occupy 0.1% of Kursk region. It is important in preservation of biological diversity of the region, in its territory as of December 31, 2013 lives 7531 species of live organisms from which 227 animal species, plants and mushrooms, are included in the Red Data Book of Kursk region which makes 67% of all quantity.

The region is home to 23 bird species, 9 species of insects, 9 species of vascular plants and 2 species of mushrooms included in the Red Data Book of Russia are registered. By quantity of the "Red Book" species noted after 2000, the biosphere reserve is on the 50th place among all reserves of Russia.

In recent years Kursk region successfully develops in all directions. And the most indicative example - agriculture. If in 2000 the most part of the farmland along borders of the biosphere reserve was covered with tall weeds that in turn led to the fires both in a buffer zone of reserved sites, and in the core territories, today cultivated areas make more than 1,5 million hectares. The present Kursk agrarian sector is a modern diversified agro-industrial production where 24 billion rubles of fixed assets are concentrated, these are dynamically developing large agrocompanies, more than 1000 farms, more than one hundred enterprises of food and processing industry.

Besides, The Tsentral'nochernozem biosphere reserve is included into the three of the most visited tourist objects of Kursk region.