Terras do Miño located in Galicia, is a traditional cultural landscape with many highly important natural habitats and erosive accumulation of terraces systems associated to specific sections of the Río Miño. The Miño river network drains southwest Galicia in the Iberian Hercynian Massif. 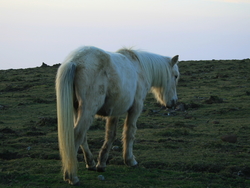 The mountain landscapes of the Serra do Xistral Mountain and the riparian landscapes of the river and lagoon ecosystems of Parga-Ladra-Támoga are particularly note worthy, with a multitude of rivers and streams flowing into the Miño, the territory’s veritable backbone.

This has given rise to a great number of priority habitats of community interest in a good state of conservation, such as the Galician-Portuguese Oak groves (carballeiras and reboleiras), alluvial Alder and Birch forests, wetland scrub with Gorse, Erica and Broom and semi-flooded grasslands withpeculiar peat-bogs with mosses and sphagnum.

Among the fauna, together with the permanent presence of the Wolfare Otters and River Mussels, species that, because of their extreme sensitivity to water pollution, show that the riparian ecosystems are in good condition.

The river and lagoon ecosystems of Parga- Ladra-Támoga, together with the totality of the mountain landscapes of the Serra do Xistral, have been proposed for inclusion in the Natura 2000 Network as Natural Protected Areas within the category of Specially Protected Natural Value Areas,according to the provisions of Law 9/2001 of 21 August of Conservación da Natureza.

These are reflected in the Reserve’s cultural landscapes, defined by UNESCO as the result of the joint work of nature and humans over centuries.

Thus traditional farming activities and silvo-pastoral activities have resulted in a mosaic of permanent grasslands and croplands with considerable areas of scrubland and Oak forests, used by the autochthonous races of cattle such as the Blond Galiciancow and the Galician pony (cabalo do monte).

The declaration of the Roman walls in Lugo as World Heritage added to the cultural, crafts and ethnographic wealth of the Reserve and the beauty and diversity of its water and mountain landscapes, and the gastronomy and thermal springs in the area are presently the basis for an increasing tourist and service sector.