Taimyrsky Biosphere Reserve is located in the northern Siberian lowlands on the Taimyr Peninsula. The site is a cluster biosphere reserve with three core areas (one covering part of Lake Taimyr), each with a relatively narrow surrounding buffer zone, and which are protected collectively as the Taimyr State Reserve. The area represents a highly important breeding site for birds in the northern part of the East Atlantic flyway. The biosphere reserve covers pristine tundra and steppe habitats as well as the northernmost forest communities with larch and dwarf birch. 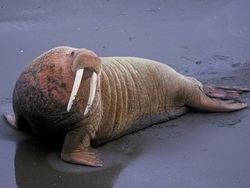 In the greater part of the area, the relief is flat; the contemporary appearance of the surface was formed mostly by intermittent glaciations and marine transgression events during the Quaternary period, and subsequently by alluvial activity of numerous rivers.  That is why the terrain features rather well pronounced, relatively flat plain landscapes of the marine (lacustrine-lagoon) origin, hilly-ridge moraine ranges and lake-covered flat lacustrine-alluvial troughs. The entire area lies in the continuous permafrost zone, whose thickness is up to

The Biosphere Reserve is home to wild reindeers, muskox, polar foxes, snowshoe rabbits, as well as polar bears, walrus, ringed seals and white whales. It is an important nesting place for over 80 species, such as the black-throated diver, the white-fronted good and the Siberian duck. The area is a summer-breeding ground for the Laptev Sea walrus (Odobenus rosmarus laptevi), which is currently in the WWF Red Data book. 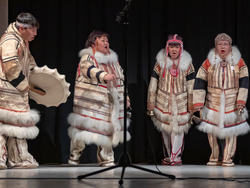 Some 3,600 people of six ethnic groups live within the biosphere reserve (1994) who make their living from trapping, fishing and reindeer husbandry. Most of the populations are either ethnically Russian or part of the indigenous communities of Dolgan and Nganasan (photo). There are no significant effects associated with human impact zones, at individual locations there are localized pollution impact sites.

At present due to growing transportation costs the level of economic activity in the co-operation zone has dropped significantly: reindeer hunting has shrunk by 5 times versus the end of the 1980’s, practically no trapping is practiced today, very little commercial fishing is done in areas far away from the district center.