Srebarna Lake is the last Danube riverside lake preserved in Bulgaria and is unique example of this common in the past type of wetlands. It is a freshwater lake that shelters vast diversity of plant and animal species characteristic and rare for the region. Some of the plant formations are typical for the wetland like the floating reedbeds and flooded willow woodlands. 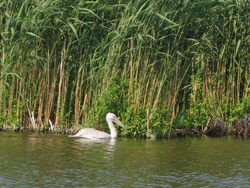 “Srebarna” supports high and valuable biodiversity. Total of 1166 genera has been recorded in the area with 2 748 infrageneric taxa; 243 bird species have been recorded in the area or 57.5% of the Bulgarian ornithofauna, 90 of them are Species of European Conservation Concern (SPECs); 11 plant species of the Bulgarian Red Data Book; 27 amphibians and reptile species and 23 species of fish or 18.1% of Bulgarian freshwater fishes. The observed Plant species are 1430. Srebarna is a hotspot site, for Bulgarian biodiversity and for national part of the continental biogeographic region.

The wetland is an important breeding, staging and wintering site for large number of birds. It is the only breeding site of Pelecanus crispus, the colony of Phalacrocorax pygmeus as well as of the largest breeding population of Aythya nyroca in Bulgaria. It is an important staging area for molting of Aythya nyroca and other rare and endangered in Bulgaria wildfowl species (Anas strepera, Aythya ferina, Anas querquedula). During late autumn and in winter it provides staging site for geese species – Anser albifrons, supports one of the largest concentrations of Anser anser in Bulgaria during this period. The lake provides foraging area for the large Phalacrocorax carbo colony situated on the nearby Danube Island, and in the recent years the Pelicans and Pygmy Cormorants feed in the lake as well. The wetland supports viable populations of number of fish species, of which some are endangered in Bulgaria – Pungitius platygaster – one of the densest populations in the country.

The site supports up to 52 355 waterbirds on migration and wintering (Anser albifrons – up to 50,550 individuals). 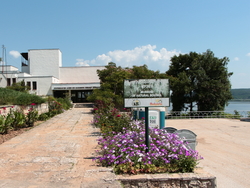 Within the core area there has been no economic activities. In the buffer zone traditionally agriculture and forest activities are practiced. Agricultural lands are used intensively for grain production with crop rotation of oilseed rape and other crops. Pasture grounds are used relatively less as the number of domestic animals has significantly declined over the recent years.

There is no tourism industry within the biosphere reserve. Nevertheless tourism is somewhat developed in the buffer zone. There are tourist facilities built and tourist paths and routes developed. There is a museum and an information Centre. There are a couple of guest houses in the adjoining village of Srebarna. Main objects of interest are the Nature Museum in Srebarna village and the tourist paths alongside the reserve itself. In the recent years the number of visitors has been steady.