This biosphere reserve is located on the Gulf of Naples and encompasses the active volcano Vesuvius, famous for its eruption in AD 79 which, engulfed the town of Pompeii. The biosphere reserve includes the Vesuvius Park, which is protected, and the transition area covering the surrounding coastline. The ‘Archaeological Areas of Pompeii, Ercolano, and Torre Annunziata’ are also inscribed on the UNESCO World Heritage list. This area has been settled since Antiquity and incorporates the town of Pompeii and the Vesuvian Villas, which were built by rich Neapolitan families in the sixteenth and seventeenth centuries.

There is a long history of studies on the colonization of lava by vegetation throughout different epochs. The traditional agricultural areas are diverse in fruit, vines and flowers. The diversity of fauna is relatively poor, however the site acts as a resting and staging area for migratory birds. The local population practices agriculture, but traditional activities are declining. Measures are now being taken to renew interest in rural heritage and to develop cultural tourism and ecotourism. 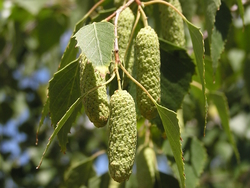 The Somma-Vesuvio volcanic complex is an important geological asset of continental Europe, and a typical example of a fence layer volcano, with two morphologically distinguishable structures: the caldera of Mount Somma and the Gran Cono of Mount Vesuvius. Mount Somma has a very steep southern slope, while the northern slope is less steep and furrowed by numerous deep valleys, distributed radially up to the slopes. Mount Vesuvius has a typical cone shape, with a crater diameter of approximately 500 m and a depth of approximately 300 m.

Although the park area forms part of a highly anthropized context, and has assumed the typical characteristics of a biogeographic island, it is home to a very interesting wildlife community. The flora present in the area of the reserve are essentially Mediterranean, with numerous studies demonstrating the colonization of the volcanic complex by more than 1,000 species, if extinct and recent species are included. Species of phytogeographical interest include the white birch (Betula pendula) and the Chinese ladder brake (Pteris vittata).

The core and buffer area of the reserve host numerous interesting species from a conservation and biogeographical perspective, and its biotic communities are a reflection of the area’s peculiarities. The micro fauna is particularly rich and interesting, and in recent years the establishment of the protected area has led to a significant increase in many species of birds and mammals, such as the buzzard (Buteo buteo), fox (Vulpes vulpes), and European rabbit (Oryctolagus cuniculus).

About 600,000 people inhabit the Vesuvian area, in spite of the impending threat from the presence of the volcano. Industrial sectors that characterize the area are linked to agriculture and tourism. Nevertheless, sectors such as textiles, clothing and niche industries related to the craftsmanship of coral have experienced significant growth in recent decades, which has had an effect on the area’s socio-economic organization.

The Vesuvius area has witnessed the superimposition of civilizations, art and culture since ancient times up to the present day. In the Roman age, the inhabitants of the cities of Pompeii and Ercolano alone already numbered 30,000, as can be seen from excavations at Pompeii, Oplontis and Ercolano, a unique archaeological heritage that preserves the customs and traditions of daily life in AD 79. The territory however reveals traces of many ancient civilizations, from Roman to Etruscan, Byzantine, Saracen, Norman, Swabian, Angevin and Aragon up to the present day.

The archaeological areas of Pompeii, Herculaneum and Torre Annunziate are inscribed on the UNESCO World Heritage List.