The Las Sierras de Béjar y Francia biosphere reserve is located in the east of the Iberian Peninsula, specifically in the southeast of the Salamanca Province. In the west of the reserve lies the pit of Cuidad Rodrigo and Sierra de Gata. The reserve’s topography is marked by mountain ranges which traverse the area from the northeast to the southwest. These ranges have steep slopes, large gaps, and divide into two sub-plateaus in the centre. While the higher altitudes reach up to 2,425 metres (La Ceja), the lowest mountains reach 360 metres (Soto Serrano). The two major rivers Duero (north) and Tajo (south) intertwine within the reserve and create hydrographic basins of high geographical and geological value. During the Ice Age, many flora species were isolated within Las Sierras de Béjar y Francia. Following the melting of glaciers, these endemic and rare species became of great phytogeographical importance. 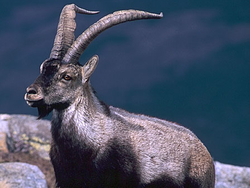 Las Sierras de Béjar y Francia is influenced by a Mediterranean climate; however, Atlantic winds and rainfalls also impact the area. Together with the altitudinal differences, this very rare combination of climatic influences leads to the development of rare and globally unique species. Furthermore, the major ecosystem type isMediterranean deciduous woodland. The Sangusín river valley is situated in the west of the reserve with abundant oak forests and meadows, producing an ideal area for livestock farming. In addition, the Cuerpo de Hombre river flows through the south of Las Sierras de Béjar y Francia, forming a valley where chestnut trees flourish.

Characteristic flora species include Alnus glutinosa (European alder) and Fraxinus angustifolia (Narrow-leafed ash tree). Quercuspyrenaica (Pyrenean oak) is distributed throughout most of the region (24% of all flora species) and meadows (22% of vegetation) account for a large area of the reserve. Fauna species such as Discoglossus pictus (Mediterranean Painted Frog), Erinaceus europaeus (European hedgehog) and Myotis mystacinus (whiskered bat) also live within Las Sierras de Béjar y Francia, while Tinca tinca (tench) is of a great commercial value. Lastly, the biosphere reserve contains Lynx pardinus (Iberian lynx) – one of the rarest and most endangered species in Western Europe. 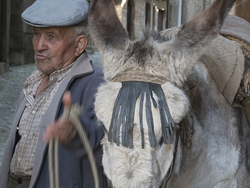 At present, 43,813 people live within the transition zone. In the summer season this number triples, as tourists come to enjoy the natural surroundings. Recent years have seen a continual increase in the number of elderly visitors. Las Sierras de Béjar y Francia used to be a ‘passing zone’ between the two sub-plateau of the mountain range with numerous foreign travellers visiting the area. Between the late nineteenth and twentieth centuries, painters and photographers such as Ruth Mathilda Anderson, Kurt Hielscher and Arxiu Mas enjoyed views of the mountains. The reserve also attracted French and German researchers who explored the floristic diversity of the reserve, and in the early 1800s battles were fought in this region during the Spanish War of Independence.

Nowadays, the main economic activities are livestock (beef [38%], sheep and goat [38%], pork [24%]) and agriculture (vineyards, olive and cherry trees). Many traditional small farms still exist, but more efficient production ways are being sought to meet the economic needs of today’s society. However, the irregular landscape has proven a challenge to the implementation of new production methods. Las Sierras de Béjar y Francia also boasts unique cultural values with basket-weaving and the embroidery of carpets accentuating artistic traditions in the area. The reserve also contains many unique architectural features among the medieval walls and streets. Many three or four-floor houses maintain traditional features with the ground floor used for cattle, the second floor for housing, and the third as a storeroom.