Sierra del Rincón Biosphere Reserve lies in the northeastern sector of the Community of Madrid. The relief is characterized by a mountain chain in the north, east and south and the eastern part also includes two valleys: the Hiruela Valley delimited by summits with slopes descending towards the Jarama River, and the Puebla Valley that constitutes a drainage river basin. 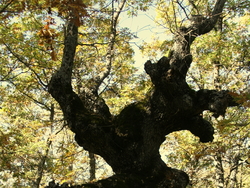 The Biosphere Reserve harbours a variety of species of flora and fauna associated with its history of farming and stock-raising.

The singularity of the Reserve arises from the mosaic formed by Dehesas, rocky areas, scrubland, rural units and reforested woodlands, organized around four depressions of valleys of varying sizes: the Pradena.

Montejo depression and the valleys of Horcajuelo, la Hiruela and la Puebla; surrounded by mountainous belts such as the southern foothills of the Cebollera massif and the Peña de la Cabra and la Hiruela sierras. The Dehesas, clearly differentiated by their fences, are located in the low land slopes and valley bottoms and alternate with fenced-in fields and rural units; the reforested woodlands are located on the slopes together with rocky outcrops and scrubland with grasslands developing in the highlands.

As a whole, the territory includes seven types of natural habitats:masses of mixed or single-species pine; shrubland formations, Piornales (Cistus and Broom formations), acidophilicscrubland (Cistus or Rock-rose and Erica or heathetc.); Oak groves; pasture land; rocky places; Beech forests such as that of Hayedo de Montejo, particularly interesting because of its uniqueness; Ash and Holm Oak forests and riparian forest formations. Biodiversity is represented by numerous species of flora and fauna conferring a high value on conservation of the BR territory.

Many of these species are endangered and legally protected by international conventions, regional or national catalogues or are endemic species that are scantly distributed in Mediterranean environments.