One hour drive from the city-centre of Berlin, this sparsely populated landscape of lakes, forests and low-rise hills is a leader of organic agriculture. Within the UNESCO Biosphere Reserve, there is a UNESCO World Heritage site, the “old beech forest at Grumsin”, as well as the famous monastery ruins at Chorin, a prime example of Gothic brick architecture. 15,000 years ago, the last ice-age shaped the face of the Biosphere Reserve, forming a landscape of unique character and outstanding beauty that accommodates a variety of biotopes and habitats. It is one of the largest protected areas of Germany.

Schorfheide-Chorin Biosphere Reserve administration as part of the State Office for Environment within the Brandenburg Ministry of rural development, environment and agriculture. 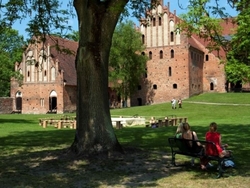 The so-called „Schorfheide“ within the Biosphere Reserve Schorfheide-Chorin is one of the largest forests of Germany. Without man’s influence on nature 90% of the Biosphere would still be covered by wood. But due to a great misuse of the woods in the 17th and 18th century, when extensive, open landscape with mainly bushes and shrubs were created, only half of the territory is covered by forests nowadays. The other half is composed of arable land, grasslands, perennials, lakes, settlements as well as moors and swamps. The diversity of inshore waters of the Biosphere Reserve is outstanding in Germany.  Endangered species such as whitefish, beavers (Castor fibre) and otter (Lutra lutra) are spread throughout the whole Biosphere Reserve. 16 of a total of all 22 bat species occurring in Germany live here.﻿ And nearly every village still has its own breeding pair of white stork.

Several species of reptiles and amphibians, which are threatened with extinction everywhere else in Germany, occur in high numbers: example are the Fire-bellied Toad (Bombina bombina) and the Great Crested Newt (Triturus cristatus).

Promoting and supporting organic agriculture is a key success story of the Biosphere Reserve. Organic farming and extensive grassland use today is done on nearly half of the farmland and is envisaged to be further expanded. A regional brand created by the Biosphere Reserve is the result of a research project in order to strengthen the regional economic cycle. The brand serves as a guarantee that the products and services are made in a healthy and sustainable way. Furthermore, producers benefit from common regional marketing. In addition, old cereal, potato and fruit varieties are promoted and maintained.

Since July 2017 and for a period of 8 years, the EU-funded research Life-Project “ZENAPA - Zero Emission Nature Protected Areas“ is implemented in the Biosphere Reserve. The initiative aims to establish synergies between nature conservation and climate change mitigation.