The Salzburger Lungau & Kärntner Nockberge Biosphere Reserve provides a representative example of inner-alpine landscapes with high mountains and deep valleys.  It is a richly structured landscape ranging from 600 m to 3,000 m above sea level and encompasses typical ecosystems of the Central Alps such as mountain meadows and marshes with great biodiversity. The human inhabitants have profited from this biodiversity for millennia, currently primarily in the form of ecotourism. 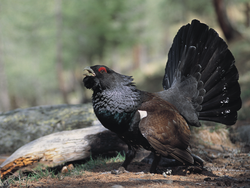 The Salzburger Lungau & Kärntner Nockberge is the biggest Biosphere Reserve in Austria covering an area spread over the provinces of Salzburg and Carinthia. The site is extremely diverse: from marsh areas and alluvial forests in the valleys to cultivated meadows and woodland areas at intermediate altitudes, extending up to the glaciers of the alpine summit regions. A large proportion of the different types of vegetation native to both federal provinces can be found here.

The mixed forests of the montane level are composed of deciduous and coniferous trees, whereas in this region the hillsides close to the valleys are covered by high montane spruce forests, which gradually give way to larch and Swiss pine with increasing height. Bogs, boulder piles, avalanche stretches and rock steps often interrupt the dense coniferous forests of the subalpine level.

Due to the geological conditions, a remarkable multiplicity of bogs has formed particularly in the southeast of the Preber. These include the Ramsar protected area called “Überling mires”, which, with 117 ha of oligotrophic bogland, represents the largest bogs complex in Austria.

The Biosphere Reserve is a refuge and a home for many animal species such as the barbastelle bat (Barbastella barbastellus) and the whiskered bat (Myotis mystacinus), as well as many predators such as badgers (Meles meles), lynx (Lynx lynx) and bears (Ursus arctos). In addition, bird  species such as the eagle owl (Bubo bubo), the black woodpecker (Dryocopius martius) and the capercaillie (Tetrao urogallus) find food – i.e. insects, seeds, fruit – as well as nesting sites in the area. 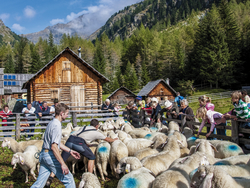 The Lungau-Nockberge Region has been an area of human settlement for many thousands of years. The diverse structure and scenic beauty of this region are the main attractions for visitors from all over the world. The national and international interest in the distinctive cultural and natural landscape features constitute a main economic mainstay of the region.

Apart from hunting and gathering, early farming techniques including using meadows for fodder, trade and mining have been important ways for earning a living in the region.  The permanent population is 33,350, of which 21,000 live in small towns. More than 50% of the jobs are found in the construction industry, public health sector and commercial goods industries (cosmetics, luxury food, wood, rubber, plastics).