The Redes Biosphere Reserve is the third biosphere reserve in the Cantabrican mountain range in the Province of Asturias. It is characterized by great biological and cultural diversity and is part of the effort to create a Gran Cantabrican Biosphere Reserve together with Somiedo and Muniellos that would be the first biosphere reserve in Europe to cover an entire ‘ecoregion’. Redes comprises two parts characteristic of the Cantabrian Mountains: the karst limestone areas in the eastern regions, and the silica, quartzite, slate and sandstone areas in the west. 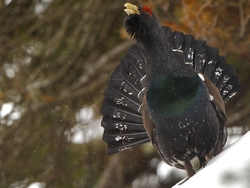 Redes is located in the northern slope of the eastern Cantabrian Cordillera in the upper basin of the Nalon, one of the rivers with the most discharge in northern Spain.

The territory includes the whole of the Caso and Sobrescobio Councils, with altitude variations ranging from the River Nalon at 350 m to 2,104 m at the Pico Torres.

The land forms are steep with deep ravines and spectacular waterfalls such as those along the Ruta del Alba.

The ecological importance of the Biosphere Reserve is note worthy for its vast forest masses of autochthonous Beech and Oak thatare in a good state of conservation enabling emblematic species to survive, such as the Brown Bear, the Western Capercaillie, the Royal Eagle, the Egyptian Vulture, the Middle Spotted Woodpecker, etc, and also for its productionof water resources that supply water to the whole central Asturian watershed. 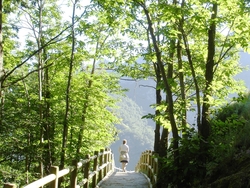 Some unique architecture is note worthy such as the stone cabins with slate roofs, located in the high valleys of the summer grazing lands and the traditional stone granaries.

Herds of the endangered Casina cattle or Asturian mountain cattle are to be found in Redes, and their milk is used to make the famous Casin cheese.