Redberry Lake Biosphere Reserve covers 112,200 hectares in the province of Saskatchewan, south-west Canada. The regional landscape is composed of rolling prairie dotted with seasonal ponds and marshes along with aspen/shrub groves. The core area is a saline lake with several islands. There are small patches of natural mixed prairie which are very rare in this highly grazed and cultivated part of the prairies. 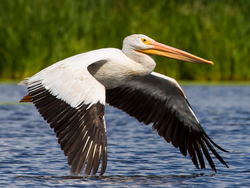 Redberry Lake is a closed basin in which water entering the lake does not pass out through downstream flows. The lake itself is a large kettle hole characterized by a central flat bottom. Gently shelving underwater slopes occur above depths of approximately 25 m. Water is shallowest in the south-west, south-east and north-east areas, and around the islands.

There are small patches of natural mixed prairie which are very rare in this highly grazed and cultivated part of the prairies. Major habitats and land cover types include: typical prairie grasses such as wheat grass, fescue, oat grass and sedges; forest dominated by aspen with shrubs such as Rasp, silver willow and hawthorn; a saline lake with rocky islands; farmland cultivated with wheat and barley; and pasture land. The reserve provides habitats for nine endangered, threatened or rare bird species, as well as over 180 other species including the White-winged Scoter (Melanitta fusca), California gull (Larus californicus), ring-bill gull (Larus delawarensis) and piping plovers (Charadrius melodus). A key research activity undertaken in the area is monitoring of American White Pelican (Pelecanus erythrorhynchos) nesting sites.

Less than 1,000 people live in the area (2006) most of which are Euro-Canadians, primarily of Ukrainian origin. The main economic activities in the region are agriculture and livestock rising. Eco-tourism development over the past decades has encouraged new ways of looking at local habitats and brought new hope to some community enterprises. The expansion of sustainable tourism activities in tandem with wildlife protection is supported by a vast majority of stakeholders, including representatives of the local communities. The protected status of the site prevents tourism from intruding into fragile areas and allows tourist numbers to be kept at sustainable levels.

New sustainable models of agriculture are being adopted including grazing management in Prairies ecosystems and there exists strong potential for the development of new sustainable agriculture, livestock and silviculture products that could be marketed under the biosphere reserve ‘brand’. There is also potential for linkages with other biosphere reserves to market products from sustainable resource use, and to educate the general public about conservation practices.