Northwest from Budapest, forced by the andesite block of Börzsöny and Visegrád Hills the Danube flows in a narrow, meandering valley – almost like a U-turn, called the ’Danube Bend’. The scenery was described by Bernard Newmann as ‘one of the grandest’ stretches of the 2000 miles long river. The Pilis and Visegrád Hill ranges on the west bank of the Danube – once a royal hunting ground – were designated a Landscape Protection Area in 1978 in order to conserve the landscape and its abundant natural values. Due to these values and the remarkable possibilities for environmental education it was recognized as part of the International Network of Biosphere Reserves by UNESCO. 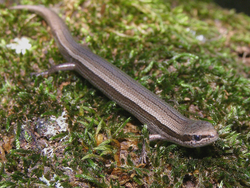 An unique feature of this biosphere reserve is its diversity. The range of hills, cut across by valleys due to tectonic forces and erosion, is made up of more than ten types of rocks, involving Dachstein Limestone, Andesite tuff, etc. On this variable surface, according to the relief and aspect, several plant and animal communities have formed.

Over one hundred lakes can be found on PBR territory, including both natural and small artificial (10 m2 to 1 ha) ponds. The natural ones were created by earthquakes, tectonic movements and mud slides; the artificial ones were created by the damming of river valleys. These little ponds served as water reservoirs for wildlife and for grazing animals in the forests. By now even the artificial ponds present a natural view, their flora and fauna are very valuable. These small ponds are exceptionally important to BR’s herpetofauna, they provide places for reproduction to amphibians. Unfortunately many of these ponds have been completely filled with sludge. As part of this project 14 small ponds were restored

The transition zone is situated inside the national park. The main land use is forestry, but viniculture, fruit production, grazing and plant cultivation are also important activities. Hunting and silviculture are the first to be mentioned among the historical land uses. Throughout this hilly region there was a vast hunting ground reserved for royalties and later for the State. The Catholic Church owned forests here in the past too. Viticulture and wine-growing is the second to be mentioned, which had flourished from medieval times till the turn of this century (in that time Szentendre – Buda wine-growing region was well known and appreciated in Europe). Then there was a major set-back caused by a pest. It played an important role in this region from the beginning of this century to World War II. After World War II fruit-production was finished. Secondary steppes were formed at the place of abandoned orchards, and small gardens and holiday camps were established in the 1960s and 1970s at the place of steppes.