Paúl do Boquilobo Biosphere Reserve in Central Portugal consists of a natural freshwater wetland surrounded by marshes, which lie in a bend of the Almonda River. Floods from the Tejo River naturally inundate the site in winter and part of it subsequently dries out when the water table is mechanically lowered in spring to create larger areas for cultivation. The site may also act as a flooding buffer zone contributing to increased protection of adjoining farmland areas against erosion caused by winter floods.

For many years this wetland has been a valuable sink for alluvial particles carried in by the Tejo River creating rich cultivated areas, which have contributed to the economic wealth of the area. 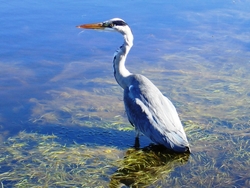 The marshes have characteristic aquatic vegetation in permanently inundated areas. Lines of cottonwood (Populus sp.), willow (Salix sp.) and other trees make up characteristic hedges around the wetland and offer excellent cover for breeding birds and other fauna. Three core areas are designated including the densest willow growths. Sunflower and other fast-growing annuals are grown on fertile sediments around the marsh. The wetland, which is also a Ramsar site, is a very important wintering site for waterbirds in Portugal, with concentrations of ducks pintail (Anas acuta) and cattle egret (Bubulcus ibis), little egret (Egretta garzetta), black-crowned night-heron (Nycticorax nycticorax) and a growing population of the spoonbill (Platalea leucorodia).

Strategically located between the Lisbon Metropolitan Area, the Centre and the North of the country in the one hand, and the Alentejo and Beira Interior in the other, the Paul do Boquilobo Biosphere Reserve's comprises two counties with a total area of 35,432 hectares and a population of 42,251 inhabitants.

10% of the population covered by the PBBR is employed in the primary sector, 20% in the secondary sector and 70% in the tertiary sector. Besides agriculture, the area relies on its natural, cultural and equestrian heritage to attract tourists.

The Lusitanian Horse, as heritage considered also as rural, is a spotlight in this territory. The high level of social rootedness that traditionally the Horse figure has in the local community, and that remains until today, allows a high level of identification and social implication with the brand “Capital do Cavalo” (Capital of the Horse), as well as with the breeding of the Pure Lusitanian Horse.