Organ Pipe Cactus Biosphere Reserve and National Monument is situated in the Sonoran desert in southwestern Arizona at the border to Mexico. Wide alluvial basins separated by steep mountain ranges characterize the topography of the area. 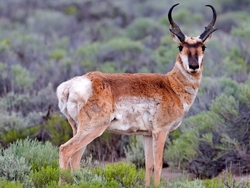 The area represents well the predominantly desert scrub vegetation of the Sonoran Desert, including the organ pipe cactus (Stenocereus thurberi), a large cactus rarely found in the United States but common in Mexico.

he entire area, with the exception of the upper parts of the mountains, has been modified by cattle grazing in the past. This activity is thought to have originated in 1699 and continued until 1978, when the remaining livestock were removed. Though the extent of modification is mostly unquantified, it has resulted in visible soil erosion and some floral species composition changes.

Organ Pipe Cactus is part of the International Sonoran Desert Alliance (ISDA) which includes citizens, native Americans, business leaders and organizations of the United States and Mexico (including the Alto Golfo de California Biosphere Reserve) which are concerned with the western Sonoran Desert. ISDA has developed several culturally and environmentally focused community-based activities.