Situated on the Olympic Peninsula on the north-west coast of Washington State, Olympic Biosphere Reserve and National Park is known for its ecosystem diversity, including the rugged glacier-capped mountails, wild Pacific coast and magnificent stands of old-growth and temperate rain forest. 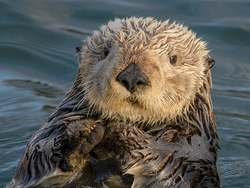 Glacier-clad peaks interspersed with extensive alpine meadows are surrounded by an extensive old growth forest, among which is the best example of intact and protected temperate rainforest in the Pacific Northwest. Characteristic trees are Sitka spruce (Picea sitchensis), western hemlock (Tsuga heterophylla) and western red cedar (Thuja plicata). Eleven major river systems drain the Olympic Mountains, offering some of the best habitats for anadromous fish species in the country. The area also includes 100 km of wilderness coastline, the longest undeveloped coast in the United States, and is rich in native and endemic animal and plant species, including critical populations of the endangered northern spotted owl (Strix occidentalis) and marbled murrelet (Brachyramphus marmoratus). The large coastal subspecies of Roosevelt elk (Cervus elaphus roosevelti) was first described in the Olympic Mountains and its protection was an important reason for establishing the national park in 1938. The area is also designated as World Heritage site. 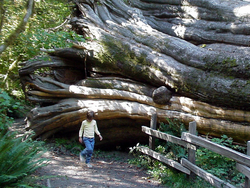 No timber logging is permitted in the national park, however there is some illegal felling, rapidly increasing around the boundaries. Introduced mountain goats (Oreamnos americanus) have had an impact on high elevation communities.

About 3 million tourists annually visit the area. Several touristic trails have been designed and a website to support trip planning was launched with various downloadable contents, such as maps and information leaflets.

The Olympic Mountains are the traditional homeland of many Native American groups who have benefited from the rich natural resources of the forests and rivers.