This transboundary reserve is located in South-Eastern Europe on the Balkan Peninsula between Albania and North Macedonia. The area is a combination of water bodies and surrounding mountain reliefs while flat areas border the external limits of the territories stretching across the two countries.

The Ohrid-Prespa Transboundary Biosphere Reserve includes a significant difference in terms of ecological systems, ranging from mountainous areas around the three lakes, to temperate sub-tropical forests found at lower altitudes around the water basins. Together, the Ohrid and Prespa Lake system is one of the largest in Europe of this sort. Both lakes are of special value at national and international levels due to their geological and biological uniqueness. Lake Ohrid is famous for over two hundred endemic species in groups such as diatoms, oligochaetes, leeches, poriferans, tricladids, molluscs, ostracodes and fish. Five of the endemic species are restricted, even within the lake to micro-ecosystems. Ten of the lake’s 17 fish species are endemic and include the Salmonid ohrid trout, Salmo letnica and Belvica acantolingua ohridana.

Mammals represent the second most important group of species whose protection is crucial in the transboundary biosphere reserve, including: Talpa stankovici (Balkan mole), Lynx lynx martinoi (Balkan Lynx), Canis lupus (gray wolf), Ursus arctos (brown bear), etc. The Balkan Lynx is an exceptionally rare species of very high symbolic value. As far as bird species are concerned, the Dalmatian Pelican (Pelecanus crispus) is the epitome of a flagship species. In the Prespa region there are over 260 species of birds, representing more than half of the types of birds in Europe, 140 of which nest in the area. 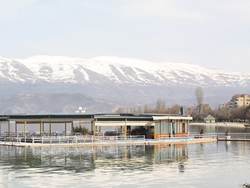 The estimated population in the entire transboundary biosphere reserve is 455,000 inhabitants, featuring an area rich in terms of cultural, ethnic and religious diversities. The settlements are only in the transition areas and they host communities which are relatively stable from a demographic point of view; but some of them (in particular Ohrid and Struga on the North Macedonia shore of the Ohrid Lake, and Pogradec on the Albanian side) are significantly growing during the tourist seasons.

In Albania, agriculture still represents the main economic activity for local populations, and is present in both the transition zones and some parts of the buffer zones. Recently, the food processing industry has been growing significantly (particularly in Korca), parallel to traditional agricultural activities, resulting in the construction of new settlements for this specific production.

The primary sector represents the most important development sector in the entire transboundary biosphere reserve. In many areas traditional small scale family based agricultural practices have been replaced by more intensive cultivation systems (e.g. fruit cultivation in the area of Resen, in North Macedonia, and intensive agriculture in the Korca plain, in Albania). Forestry activities are also relevant in the mountainous areas. Stockbreeding is another important agricultural activity in Ohrid-Prespa, with local operators (both in Albania and in North Macedonia) expecting to improve species structure, conditions for breeding, and implement the needed technical zoological measures for all livestock breeds with the aim of increasing livestock production.

Ultimately, tourism represents the key development sector for the entire transboundary biosphere reserve, with the Ohrid city population at 42,000; it hosts approximately 6 times that amount during season highs. The site intends to foster the creation of eco-tourism packages as a means of reducing the depletion of natural resources from tourists. Fishing is another key activity with relevant ecological and economical impacts on the three lakes. Other economic inputs include pine cone collection for ornamental purposes, the sales of medicinal plants of the alpine grasslands in international markets and the sale of NTFP (non timber forest products) such as mushrooms and berries.