Germany’s largest pond region is represented by this biosphere reserve. It extends approximately from Kamenz in the West to the Neisse River in the East. The biosphere reserve is characterized by a vast diversity of habitats varying extremely in a small area. For instance, ponds are located right next to sandy dunes. In addition, the transition from Atlantic to continental climate in this area explains the rich species diversity. 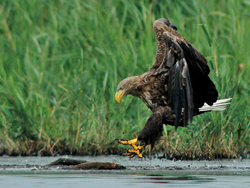 The area of Oberlausitzer Heide- und Teichlandschaft Biosphere Reserve has been shaped and modified by human use for more than three millennia since the Bronze Age. In addition to the original habitats, this has created cultural ecosystems, resulting in richer species and habitat diversity. The pond and watercourse ecosystem which has been created is an outstanding landscape feature.

The core area is mainly representative of the few near-natural habitats such as bogs, carrwoodlands, dune pine forests – of which only very small patches remain – and adjacent forests and heathlands. The Biosphere Reserve’s post-mining landscape is unique in Germany: due to the lack of post-mining remediation here, soil formation and natural succession can take place unhindered. In accordance with the Biosphere Reserve Ordinance, the core area is a strict nature reserve; its protection regime precludes any human activity.

The buffer zone contains most of the pond ecosystems which, in terms of their cohesion, complexity and species richness, are also unique among the German biosphere reserves. This zone also includes near-natural and largely near-natural woodlands, heaths and meadows. Tailor-made management and maintenance regimes prioritise species and biotope conservation objectives and thus aim to preserve and increase the existing species diversity. The buffer zone, like the core area, is a nature conservation area (Naturschutzgebiet – NSG) and is thus protected by law from any deterioration in its ecological status. Improved nature conservation-oriented management methods and marketing of near-natural produce are intended to create alternative income sources for land users.

Oberlausitzer Heide- und Teichlandschaft Biosphere Reserve provides a suitable habitat for many rare and protected species from a wide range of climatic regions. To date, more than 5 200 species of flora and fauna have been identified at the site (see Appendix 5). They include 1 200 species from Saxony’s Red List, some of which are found nowhere else in Germany, such as the Bog Violet (Viola uliginosa). The populations of the Eurasian Otter (Lutra lutra), White-tailed Eagle (Haliaeetus albicilla), Common Crane (Grus grus) and Great Bittern (Botaurus stellaris) and the occurrence of Mossgrass (Coleanthus subtilis) are outstanding examples. The site is also important for Saxony’s wolf population. 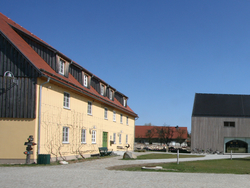 The Upper Lausitz heath and pond landscape has continued to raise its profile as a destination for soft, near-natural tourism. Due to the landscape, its culture and heritage, its leisure amenities and the opportunities that it affords to experience the natural world, its popularity and familiarity to nature lovers and holiday-makers have steadily grown.

The major annual events are now well-established and are very popular with the public. They include the nature markets and the Lachefischen, the traditional fishing festival along the river Schwarze Lache in Kreba each autumn, which attracts more than 10 000 visitors.

Conventional farming still predominates. Most of the approximately 10 500 ha of farmland is given over to grass (around 30 %) and winter cereals (barley, rye) (roughly 37 %). Root crops, legumes and summer cereals each account for a 3 % share. Maize (12 %) and oilseed rape (8 %) are increasingly being grown in the Biosphere Reserve, albeit to a lesser extent than in the surrounding area. Other crops (e.g. on project areas) cover around 4 %. The share of organic farmland (3.4 %) remains low, however; even if project areas and funded sites are included, less than 10 % of the agricultural land is farmed in a manner particularly conducive to nature conservation.