Muniellos Biosphere Reserve is located in northwestern Spain, in the southwestern most part of the Asturias Province. 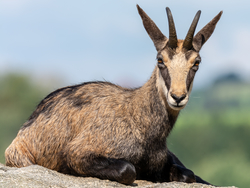 This Reserve includes various watersheds with steeply sloping landforms that only become gentler in the lower lying valleys.

The climate responds to the specific characteristicsof the extreme west of the Cantabrian Cordillera, with high rainfall, increasing considerably with altitude.

Muniellos is remarkable from the biological stand point for its rich forests as it is home to what is the largest and probably the best conserved Oak forest in Western Europe.

It includes almost virgin communities of flora and fauna that in the past were dominant in most of the Cantabrian Cordillera. In addition to the Pedunculate Oak, the dryer areas harbour a series of xerophyllus Sessile Oak forests with a stratum where Alder Buckthorn, Mountain Ash, Whitebeam, Hazelnut and Holly flourish.

In the humid shady areas, a dense herbaceous stratum develops and the dominant Oak is accompanied by Birch, Ash and Maple trees.

The abundance and diversity offungi, mosses and lichen, some of which are extremely sensitive to the slightest air pollution, reflect the purity of the environment making Muniellos seem like an enormous enchanted forest.

The magnificent Beech groves including those of Hermo Monastery, give way in the higher areas tosub-Alpine vegetation and lagoon systems such as those of the Cueto de Arbás, reflecting the glacier shaping of these mountain land forms.

Although hard to observe because of the dense vegetation, large species of Atlantic European fauna, now extinct in most of the continent, live in the Biosphere Reserve, such as the Brown Bear and the Wolf which feeds on the abundant Wild Boar, Deer and Chamois.

Birds are represented by over one hundred species, among them the rare Western Capercaillie. 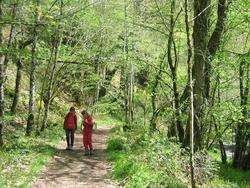 Agriculture and livestock-raising, together with forest harvestingand rural tourism.