The largest and best preserved Mediterranean forest worldwide is located in the region, which is surrounded by hills covered with oak forests and Mediterranean thicket and dotted with rocks and streams. Rivers and reservoirs irrigate the riverside areas, resulting in a rich and varied biodiversity.

This site lies the Province of Extremadura and it is characterized by sclerophyllic Mediterranean forests and Dehesas, a landscape modelled by human impacts through cattle raising and production of cork from cork oak trees. The landscape of the biosphere reserve is very representative of Mediterranean agrosylvopastoralist system. 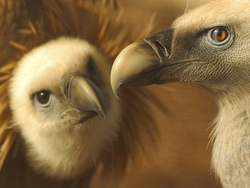 The central area consists of a succession of sierras at an altitude of about 500 m, festooned by quartzite crests.

The best representations of Mediterranean forest and shrubland, harbouring 90 per cent of the Mediterranean flora present in the Iberian Peninsula, are to be found on the slopes of these sierras, particularly on the shady sides.

Towards the outer part and coinciding with the transition zone, less rugged and more accessible to humans, Dehesas take over from the Mediterranean forest.

They are in an excellent state of conservation, together with other less representative ecosystems such as the riparian woodlands, irrigated land near the Tietar River and the orchards andsmall holdings near the villages.

The presence of endangered species, such as the Lynx and the black stork, is noteworthy. However, the most emblematic species in de Biosphere Reserve are the numerous and large colonies of birds of prey, such as the exceptional Spanish Imperial Eagle or Adalberti’s Eagle and the colonies of the Eurasian Black Vulture. 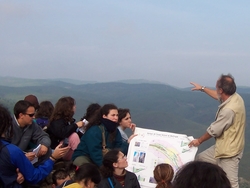 Within the limits of the Biosphere Reserve, there are 14 rural municipalities with a total population of 13,2 thousand inhabitants (2012).

The main activities in the Biosphere Reserve are open range livestock-raising, environmental education, scientific research, cork harvesting and other forest uses, together with hunting and tourism. While tourism has slightly increased since the site was declared a Biosphere Reserve, other activities have been diminishing in the past decade. For instance, from 1999 to 2009, the surface used for agriculture dropped over 30%.