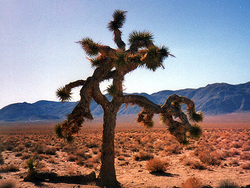 Death Valley, the principal feature of the biosphere reserve encompasses a substantial percentage of the northern Mojave Desert. This combined with its extreme altitude range (86 below to 3,368 meters above sea level) results in a large diversity of features at the northern edge of this biogeographic region. Rugged, sparsely vegetated mountains border a north-south oriented valley, and are incised by numerous deep rocky canyons terminating in huge alluvial fans. Lower and middle elevations are dominated by shrubs such as creosote bush (Larrea divaricata), sagebrush (Atriplex spp.), mormon tea (Ephedra sp.) and blackbrush (Coleogyne ramosissima). Trees include the Utah juniper (Juniperus osteosperma) and one needle pine (Pinus monophylla).

Joshua Tree National monument, some 20 km east of Los Angeles, straddles the transition area between Mojave and Colorado Deserts and is known for its Joshua tree (Yucca brevifolia) woodlands, a typical feature of the Mojave Desert which is higher, moister and slightly cooler. However, there are also characteristic species of the lower Colorado Desert including Washingtonia spp.

Mining activities, the presence of large numbers of feral donkeys (Equus asinus) and trespass grazing by cattle, off-road vehicles as well as tourism activities are the main human influences in the region. By using the biosphere reserve concept, it is expected that user conflicts in this multiple use area can be solved.