In 1997, the Luberon, that is the Natural Regional Park, in existence since 1977, became part of the Biosphere Reserve network. It is bordered to the south and east by the synclinal fold of the Durance, one of the largest rivers southeast of the Rhône which feeds important wetland habitats. The site is made up of Mediterranean plains and hills irrigated by several rivers whose flow regimes are irregular and torrential (Calavon, Largue, Lauzon, etc.). The east-west-oriented mountain ranges of Provence dominate, with some influence from the Alps. These are the Luberon massif (1,125 m) and the Vaucluse Mountains (1,256 m). 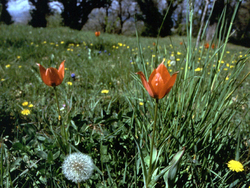 This biosphere reserve is situated contiguous to the Mont Ventoux Biosphere Reserve to the north. It consists of two mid-altitude mountain chains, the Luberon and the Vaucluse. The long history of human settlement has created a human-modified landscape and a mosaic of habitats and biotopes with a rich biodiversity.

houses, manors, fountains and chapels, all blended into the landscape. However, traditional methods of land use that created this landscape have essentially been abandoned, with profound effects on the fauna and flora. 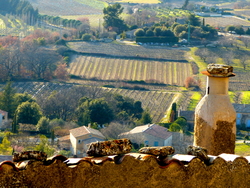 About 300,000 people live in the biosphere reserve (1997). Much effort has been made to safeguard Luberon’s heritage and maintain agricultural activities. Tourism plays a major role in the local economy and efforts are made to promote ecotourism backed up by environmental education and public information. Research focuses on the fauna and flora, resulting in detailed inventories of genetic resources.