Lake Elton Biosphere Reserve is located in the south-eastern part of the East European Plain, within the Caspian lowlands in the Russian Federation. Lake Elton is a hyper saline lake, the largest in Europe, as well as one of the deepest located (-16m below sea level) and one of the most saline lakes in the world. Close to 5,900 people, live in 14 rural settlements and herder posts in the Biosphere Reserve, with seasonal variations almost doubling human presence in the area. The lake is important to nomads and their livestock, the only remaining agricultural activity in the area, and to numerous mammals and birds, including cranes, some of which belong to threatened species. 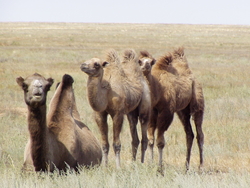 The specific features and uniqueness of the Biosphere Reserve are conditioned by its geographical location and the presence of particularly valuable, almost undisturbed natural landscapes. It is located in the transitional zone between Europe and Asia, on the boundary of two biomes (steppes and deserts), several biogeographic regions and historic distribution areas of many plant and animal species. Also the area is crossed by several global migration routes - the Black Sea-East-Mediterranean Flyway, West-Asian-East African Flyway, and the Central Asian Flyway - of many bird species protected under the Convention on Wetlands (1971), the Bonn Convention on Migratory Species of Wild Animals (1979) and the International Agreement on the Protection of Afro-Eurasian Migratory Waterbirds (2012). Annually the Lake Elton area is traversed by 1.5 to 2 million waterbirds, including globally rare species like Red-breasted Goose (Branta ruficollis), Lesser White-fronted Goose (Anser erythropus), Common Pochard (Aythya ferina), White-headed Duck (Oxyura leucocephala), Sociable Lapwing (Vanellus gregarius), as well as by 15,000-20,000 Common Cranes (Grus grus).

Lake Elton is a hyper-saline lake, the largest in Europe, (more than 15,000 hectares), as well as one of the deepest located (-16 m below sea level), and one of the most saline (200- 500 ‰), lakes in the world, characterized by extreme habitats with specific biotic composition and valuable reserves of balneological resources. 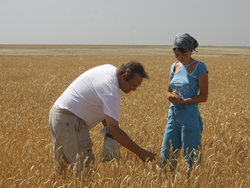 The main sectors of economic activities in the Biosphere Reserve, determining the prospects for sustainable development and the delivery of ecosystem services, include: agriculture, including traditional natural resources use; medical-therapeutic, recreational, nature conservation and scientific-educational activities. These activities are based on the use of the natural resource potential of the area, including its biodiversity and the balneological resources of Lake Elton, the established structure of land use, traditions and economic management experiences of its residents.

Agricultural production is the main driver of the local economy, conducted under harsh soil and climatic conditions on commercial farms and smallholder (subsistence) farms of local residents. The basis of agriculture is meat-and-wool sheep husbandry, the development of which is promoted by the quality of natural forage lands, the shepherds' skills of the population, and the system of fodder production.