La Gomera is centrally located in the Canary archipelago, surrounded by Tenerife, La Palma and El Hierro islands. One of the least populous islands, tourism plays an increasingly important role. 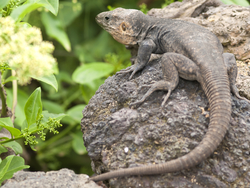 The island of La Gomera has a surface of 371 km2 and a maximum height of 1,487 m (Alto de Garajonay). It has an exceptionally sharp relief which is organized in radial and deep ravines.

Its physiography is the result of an ancient volcanic structure that has undergone intense freshwater and marine erosion. This weathering process has led to a central plateau at about 1,000 meters altitude and to its extensions along the divisions between ravines. Humidity and clouds from the sea are often stopped on this plateau producing a “sea of clouds” effect. This effect generates a high humidity that has favoured the existence of the most important area of the archipelago:  the Garajonay National Park.  The park is also a UNESCO World Heritage site and is noted for its laurisilva (laurel) forest, a habitat that has almost disappeared from southern Europe and North Africa.

La Gomera Island has a total of 4,182 species, of which 1,063 are endemic to the Canary Islands and 268 are exclusive to La Gomera. Most of the endemic species are located in the central part of the island, especially in the laurisilva forest. 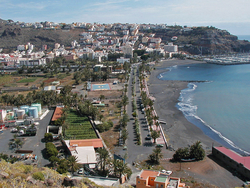 The area is characterized by traditional grazing and agricultural uses. Activities related with economic and human development have adjusted to this tradition over centuries.

Presently land use and development are implemented through the plans of the Municipalities having their area in the Biosphere Reserve. These plans contain the bases for sustainable development, primarily encouraging traditional land uses that have enabled the area to conserve its own very particular natural, socio-cultural and economic characteristics.

All the actions set out in the Land Plan aim atcombining the different possibilities offered by agriculture, animal husbandry, hunting, fishing, tourism, historical heritage and others, and to implement management that links the development of the area with conservation and the protection of the territory’s natural assets.