This biosphere reserve is situated in the western part of the Middle Bohemian range about 16 km west of Prague. It represents a wide variety of broad-leafed and mixed coniferous forest ecosystems, grasslands, pastures, valley meadows, and agricultural land. The core area is used as a hunting area, whereas in the buffer zone and transition area logging, timber processing, charcoal production, manufacturing, light industry and stone extraction as well as tourism take place. 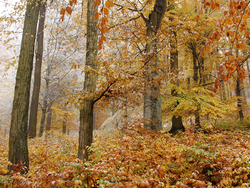 Krivoklatsko is a predeminanthy forested region of the Middle-European highlands, 62% of the total area consists of broad-leaved and mixed coniferous forests, and contains a high species diversity (about 1800 vascular plant species alone and 84 native species of trees and shrubs, etc.).

There are several reasons for this high biodiversity. The major feature of the landscape is the Berounka river valley, which creates a network of deeply cut canyons, narrow floodplains, terraces, steep slopes and cliffs. These land forms provide a great variety of habitats for plant and animal life, as well as characterizing the valley phenomenon.

The remarkable geological diversity and related differentiation of both the parent rocks and soils also add to the microclimatic factors and eventually to the biodiversity of flora and fauna. Another influencing factor is the historical presence of human settlements in the area and of the associated impacts. The fact that the area constituted hunting grounds for royalty helped to limit the extent of deforestation and human interference. Now the area is a combination of small villages, agricultural land, silvicultural plots and forests. 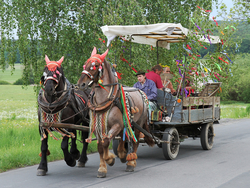 The human impact is rooted in history. During Middle Ages the area was used mainly as a King´s hunting ground. A few castles (Krivoklat, Tyrov, Zebrak, Jincov, Tocnik) for hunting purposes were built at this time. Until the mid-17th century, the region belonged to the Czech Crown. The fact that the area was considered a hunting ground for royalty has helped to limit the extent of deforestation and human interference in the course of the following years. The property rights were later transferred to individual noble families. Shortly after, clear-cutting of forest started, mostly in the original beech-oak communities with deeper soils on the  flat surface of the upper colline plateaux. Along watercourses, agriculture began on river terraces, riverbanks, and floodplains.

Industry has been developing since the begining of the 18th. century. The main industrial  branches were ironworks, glassworks and charcoalworks. Hand in hand with the industrial  revolution clear- cutting  of  broadleaved forest started.  The development of industry was based on the use of local resources.

At present, forestry is one of the most important industries in the area, with farming ranking second.  Due to its natural and historical richness, the Krivoklatsko BR hosts  lots of tourists and has to cope with the strong pressure of tourism. Short- and long-term recreation concentrates during the summer months and brings mainly negative impacts to the area (municipal sewage water which is not cleaned, solid litter, etc.).