Kizlyar Bay is one of the largest bays in the Caspian Sea and is also one of the largest migratory routes for birds in Eurasia. It represents a diversity of marine, coastal and desert-steppe ecosystems, including populations of threatened animals, such as the Caspian seal, many species of birds and sturgeons. With a surface area of 354,100 ha, it has a permanent population of 1,600 inhabitants who depend on fishing, land use (grazing and haymaking), hunting and tourism. 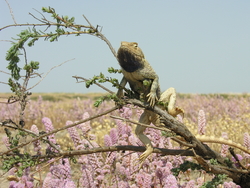 Mammals of the reserve consist of 47 species, 5 of them entered into the IUCN Red List and Red Data Book of Russia. The north-eastern part of
and
is greatly important for reproducing of Caspian seal, the only one and endemic species of the Caspian pennipeds. Other rare species include the jungle cat, Caucasian otter, European mink, and marbled polecat.

The BR is highly valuable for breeding, migration and wintering of more than 280 species of birds. Kizlyar Bay is a key part of one of the largest migratory routes of birds in Eurasia, connecting a European part of Russia, Western Siberia and North Kazakhstan with Transcaucasia, Western Asia, the Near East, North and East Africa. 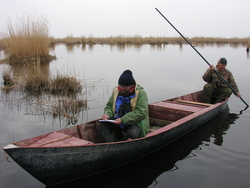 The core area and buffer zone of the proposed biosphere reserve have no permanent population available. The buffer zone seasonally supports not more than 15 people.