The Khankaiskiy Biosphere Reserve lies in the Prikhankayskaya and Prisungachinskaya Lowlands in the central part of the Zapadno-Primorskaya Plain, close to the Chinese border. The relief is mostly flat, but five ridges separated by wet depressions lie along the eastern coast of Lake Khanka. They are former beach ridges of the lake. 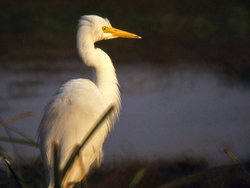 Lake Khanka, which is shared between Russia and China, is one of the largest freshwater lakes in Eastern Asia. The Biosphere Reserve includes a part of Lake Khanka and is composed of open lowlands with meadows, wetlands, swamps, and many small lakes. Also designated a Ramsar site, it is particularly noted for its variety of bird and fish species. 337 bird species are observed in the Biosphere Reserve and the variety of ichthyofauna of the lake has no analogues among other freshwater bodies in the Palaearctic (74 fish species). The unique ornithofauna of the Lake Khanka Basin was first described by N.M. Przhevalsky (1869–1870). Japanese crane (Grus japonensis), white-napped crane (G. vipio), and far east stork (Ciconia boyciana) are protected here in co-operation with other state nature reserves. The Prikhankayskaya Lowland is also the only nesting-place of reed parrotbill (Paradoxornis heudei) and intermediate egret (Egretta intermedia) in Russia.

The swamps of the eastern shore of Lake Khanka are unique in the region concerning vegetation and wildlife. The flora consists of 680 species of vascular plants and 322 species of algae. Higher plants include heat-loving and ancient species such as Manchurian water-nut (Trapa manshurica), lotus lily (Nelumbo komarovii) and prickly water lily (Euryale ferox).

The climate, landform, and soil features contribute to make this area one of the most developed agricultural areas in the Russian Far East. There are many farms, a dense communication network, inhabited areas and specialized enterprises.

Some 3,500 people, mainly of Russian and Ukrainian origin, live permanently in the Biosphere Reserve. Economic activities are not allowed in the core area, where only protection of natural ecosystems, short-term studies, and monitoring take place. In the buffer zone and transition area, the main activities include agriculture (livestock-breeding, rice, soybean and vegetable fields), forestry, fishery, fish farming, ecotourism and recreation.