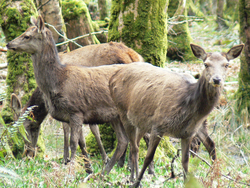 Much of the natural woodland has been cleared but the remaining fragments include the most extensive areas in the country. Due to differing geology in the biosphere reserve, three main woodland types can be distinguished: woods of sessile oak (Quercus petraea) with holly (Ilex aquifolium) in the understorey on sandstone; a yew (Taxus baccata) wood growing on almost bare limestone; and carr forest dominated by Alnus glutinosa in places along the north-east shore of Lough Leane and in other poorly-drained areas.

Present human impacts on and uses of the area include conifer afforestations, lake eutrophication and tourism activities. Additional human influence is the past introductions of alien species that have impacted on the natural ecosystems of Killarney. The most notable of these introduced species are Rhododendron ponticum and sika deer which overgraze the woodland floor and pose a potential threat to the genetic integrity of the native red deer. 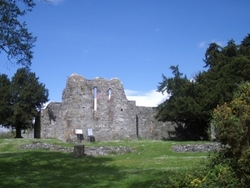 Human history has also left its mark in the biosphere reserve, e.g. with the well preserved remains of Inisfallen Abbey on an island in Lough Leane, Muckross Abbey, or the Muckross House which serves as a visitor center today. This Killarney National Park Education Centre fulfills an important educational role within the national park and biosphere reserve, which is one of the best-known tourist destinations in Ireland.