This biosphere reserve is located in the southernmost European part of the Russian Federation and covers mountain ranges of the western part of the Greater Caucasus. The designated area comprises a variety of natural ecosystems, about 80% of ecosystem types of the Great Caucasus. 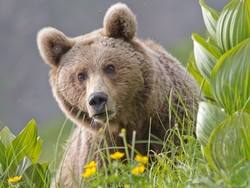 The Biosphere Reserve represents distinctive ecological belts that change with altitude from subtropics up to glacial and nival zones and offers a high species endemism. Within the biosphere reserve two biogeographical provinces meet which increases species diversity: the northern slopes belong to the Kuban biogeographical province and the southern slopes to the Colchic province. The faunistic diversity is rich, including for example the leopard (Panthera pardus ciscaucasica), brown bear (Ursus arctos), lynx (Felis lynx) and Caucasian deer (Cervus elaphus moral).

The history of the human occupation of this region can be traced back about 500 thousand years since archaeologists have found more than 150 sites of the ancient people (e.g. Neanderthal man) in the area. For many centuries the territory has been largely uninfluenced by human activities. Only more recently there has only been little impact of logging, grazing, hunting, tourism and recreation around the core area. The majority of the biosphere reserve (247,000 of 295,700 hectares) is strictly protected. Some 200 farmers live in the buffer zone and transition area (1997). However, about 40,000-50,000 tourists (1997) come annually in the biosphere reserve.