The Valles del Leza, Jubera, Cidacos y Alhama Biosphere Reserve is located in the south-east part of La Rioja Region in Spain. This is a Mediterranean mountain area of 122.810,88 ha, drained by Leza, Jubera, Cidacos and Alhama rivers. It is covered with forests of temperate-climate species and aromatic scrub, combined with a stony landscape. 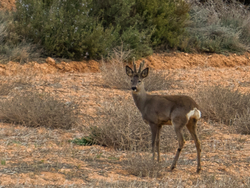 This Biosphere Reserve is in a mountain area located in the south east part of La Rioja region that belongs to the “Iberian System” range. Its highest mountain peaks reach around 1,600 meters.

Although there are some important beech forests, like the Santiago Beech grove, the main forest species in this area is Holm Oak, which can be found in well conserved forests and also in enclosed pastures. Gall-oaks and boxwood can also be found, surrounded by a diverse Mediterranean scrubland. Next to the villages the landscape became humanized, and olive and fruit trees can be found.

Well-known by the scientific community and tourism are 180 paleontological sites, with well preserved dinosaur tracks.

Hot springs and medicinal waters flow through our territory, and are marketed by spa companies. Part of these waters is sulphurous, and this sulfide in our subsoil allows the existance of pyrite mines, well-known all over the world.

The main economic activity in Leza and Jubera valleys is livestock. Mostly cattle, but also sheeps, goats and bees are raised by ranchers, herders and beekeepers in this area, which suffers from an important depopulation and aging of its habitants. Natural tourism complements rural economy through overnight stays in tourist accommodation. Mining activity linked to gypsum production is also important.

Cidacos Valley hosts the main tourist resources of the biosphere reserve and, although there is still livestock in the area, tourism is its main economic activity. There is a dinosaur amusement park, “Barranco Perdido”, footprints deposits, museums, and public and private spas. Hunting and fishing are important activities also, as well as birdwatching.

Alhama Valley produces well-known artisan footwear: hemp and jute espadrilles that are exported worldwide. The area also features “Contrebia leucade” one of the most important celtiberian cities of Iberia Peninsula, and its interpretation center. Pyrite mining is also located in Navajun.