Between the meandering Volga to the west, overlooking the steppes of Kazakhstan to the east, the 60,423-ha biosphere reserve constitutes a crossing of landscapes and cultures. At the centre of the biosphere reserve, Lake Baskunchak, known throughout Russia for its salt production, stands out from its surrounding scrubland. The biosphere reserve, a landmark of the Caspian depression, contains numerous archaeological and cultural monuments testifying to its position on the Silk Road. 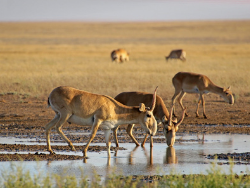 It is home to 230 bird species, such as curly pelicans, long-legged buzzards, several species of eagles and falcons, and on the migratory routes of several bird species protected under the Ramsar Convention. The mountainous semi-arid ecosystem also hosts 88 species of higher vascular plants,12 species of reptiles, notably the endemic squeaky gecko (Alsophylax pipiens), over 160 taxa of insects and 113 species of arachnids 46 species of mammals including a relic population of antelope Saigatatarica, wild boar, elk and roe deer. 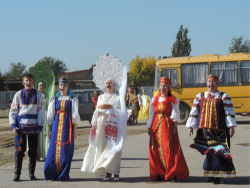