Graciosa Island is part of the Central Group of islands in the Azores Archipelago and, with an area of only 60.7 km2 and 44 km of coastline, is the second smallest island of the archipelago. It is also the flattest of the archipelago’s islands, its highest point reaching only 405 m. 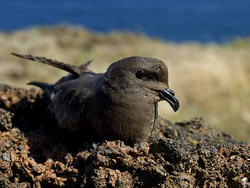 Graciosa Island stands out from the rest of the archipelago for its relative dryness associated with the absence of large reliefs, which translates into a relatively small number of habitats and species, mainly terrestrial flora and fauna.

However, this apparent limitation is offset by a high geodiversity characterized by a wide variety of geological structures, shapes and materials, with emphasis on Furna do Enxofre, located inside the Natural Monument of Caldeira (Caldera) da Graciosa, an imposing lava cave that has the largest volcanic dome in Europe. There are also hot springs, the best known on the coast of Carapacho, which feed the existing thermal facilities (Termas do Carapacho).

Furthermore, with regard to biodiversity, the natural reserve of the islet of Praia, located in front of Vila da Praia, is particularly noteworthy, as it hosts one of the richest and most diverse colonies of sea birds in the Azores and various other endemic species, in relation to its vegetation cover.

This biodiversity hotspot is sought annually by 8 rare and sensitive species of birds, which nest in it, all included in Annex I of the EU Birds Directive, of which stand out a Macaronesian endemic subspecies, Audubon’s Shearwater (Puffinus lherminieri baroli) and a local endemism, the Monteiro's Storm-petrel (Hydrobates monteiroi).

Also noteworthy is the presence of two species of bats, one endemic in the Azores (Nyctalus azoreum), which is one of the few species in the world with strong daytime activity and the other endemic in Macaronesia (Pipistrellus maderensis), with its usual nocturnal activity. 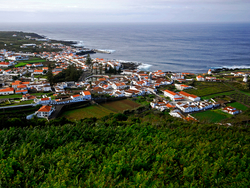 Presently, Graciosa has approximately 4,339 inhabitants, distributed throughout the municipality of Santa Cruz da Graciosa’s 4 parishes: Guadalupe, Luz, Praia and Santa Cruz, with the village of Santa Cruz da Graciosa being the main urban and administrative center on the island. Graciosa’s population continues to be strongly linked to the primary sector as a main source of income and as a secondary activity. The smooth topography allowed an extensive and varied agriculture, destined both for subsistence and for export with primary products and with added value, as in the case of wine.

Like the agricultural sector, the fisheries industry is also an important part of the economy, particularly in terms of the jobs it generates, in an island where the tertiary sector, as is common, predominates.

Graciosa Island provides exceptional conditions, in terms of natural, cultural and heritage resources, for the promotion of sustainable development. This is particularly true in the area of responsible tourism, combining sightseeing and the enjoyment of a unique landscape with biodiversity, a rich cultural heritage (cuisine, music, traditions) in terms of tourist animation and a wide array of high quality agricultural and fish products to complement this singular experience.

The pleasant climate and the existence of different and attractive landscapes give the island of Graciosa a high potential for multifunctional tourism.