The Georgian Bay Biosphere Reserve comprises the largest island archipelago of the North American Great Lakes. Known locally as ‘The Thirty Thousand Islands’, it consists of a complex association of bays, inlets, sounds, islands and shoals lying along the edge of the Canadian Shield bedrock, whose low lying hills and ridges characterize the adjacent mainland. This topography supports a rich mosaic of forests, wetlands and rocky habitat types with associated biodiversity. It is also noted for its extraordinary scenic views which attract large numbers of summer residents, cruising boaters and seasonal visitors. 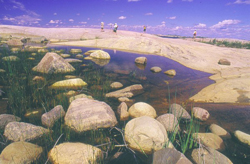 The rich mosaic of interconnected habitats, combined with the inaccessibility of much of the area, serves to support and protect a high level of biodiversity. The reserve hosts over 100 species of animals and plants considered to be species at risk in Canada. These include reptiles such as the eastern massasauga rattlesnake (Sistrurus c. catenatus), eastern fox snake (Elaphegloydii) and spotted turtle (Clemmys guttata). 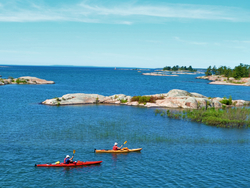 The economic base of the Georgian Bay is centred on summer tourism, retailing services, small businesses and agriculture.

Most of the native aboriginal people living in the area are descendants of Ojibway, Chippewa, Odawa and Pottawatomi groups, who are united by a common language, kinship and clan memberships. A small number of Huron and Mohawk people reside in the area and have historical links with Iroquoian kinship groups to the south.