Galloway and Southern Ayrshire Biosphere Reserve is comprised of a major bio-geographic region represented by an upland massif centered on the Merrick and the rivers that flow from this upland down through forests and farmland to the sea. Landscape mosaics in the area comprise uplands, moorlands, mires, woodlands and forests, farmland, river valleys, coast and shoreline.  The Biosphere Reserve is working to demonstrate the importance of landscapes and ecosystems for the future of sustainable development in a region which is undergoing change in traditional livelihoods. 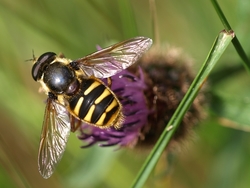 The Biosphere Reserve forms a coherent biogeographic unit influenced by underlying geology, topography and river drainage systems, with a rugged mountainous core, an extensive periphery of forest, woodland, arable land and pasture, and a varied coastline.

There are two predominant topographic regions: rolling uplands with prominent rounded hills punctuated with valleys, and lowlands of gently undulating topography with incised river valleys. In the north, the major geological and topographic feature is the Southern Uplands Fault, which marks the northern limit of the Southern Uplands and its contact with the Midland Valley of Scotland.

The high ground has a variety of acidic habitats, predominantly heathland and mires with some patterned bogs (Silver Flowe being a prime example) unusual in Britain for their upland location. These habitats are valuable for the species they support, such as raptors, including golden eagle (Aquila chrysaetos). They are also important carbon stores and have some of the longest records of pre history stored in the peat.

The lower ground has a range of habitats including native broadleaved woodlands, fens, marshes, rush pasture, unimproved lowland grassland, raised and blanket mires and moorland. There are extensive remnants of native woodlands in the wet hollows amongst the glacial landforms and in the river valleys.

Riparian planting is predominantly of native species and these provide important wildlife corridors. Wetlands in the river valleys and adjacent managed grasslands also provide over-wintering roosts for geese and swans from the Arctic. The rivers are well stocked with trout and other native species, although invasive non-native species, such as the American Signal Crayfish (Pacifastacus leniusculus) have invaded some rivers. 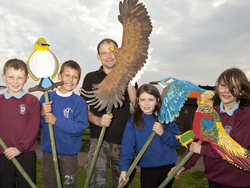 The Biosphere Reserve is largely rural in appearance, with approximately 94,000 people at an overall population density of 0.34 persons per hectare. The area is characterised by a large number of small towns and villages, but all have fewer than 10,000 residents. Ayr, Dumfries and Stranraer are three larger urban areas lying outside the Biosphere Reserve’s boundaries, but because of proximity have links to it providing services and employment for many people and communities. The Biosphere Reserve has some 8,000 people self-employed and some 5,000 small businesses.

The 20th Century witnessed a steady decline in the area’s traditional industries (livestock farming, textiles, mining, energy generation, iron smelting etc) resulting in geographic shifts in investment, jobs and population and significant landscape changes. The decline of these industries has removed the economic base of many communities and this change has had a marked and persistent effect on unemployment and other social problems in a number communities. This has led to a new understanding of the significance of the landscape and ecosystems to future prosperity. New projects and activities are more strongly linked to biodiversity and habitat management and increasingly based on an integrated view of what sustainability means to the communities within the area, and beyond.