The Fajãs de São Jorge Biosphere Reserve covers the entire island of São Jorge, the fourth-largest island in the Archipelago of the Azores. Its highest elevation is Pico da Esperança at 1,053 metres. The island’s rugged coastal cliffs form a unique landscape of highland meadows, peat bogs and scrubs. The combination of high altitude and coastal ecosystems has resulted in a wealth of endemic terrestrial flora. It is also home to diverse invertebrates, terrestrial arthropods, molluscs and bird species. Almost 9,000 people live on the island. 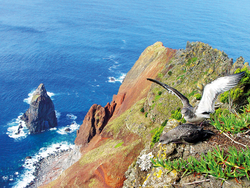 São Jorge Island has a unique landscape consisting of remarkable geological, environmental and cultural assets. Due to its elongated shape, the island has an extensive coastline, the third-longest in the Azores Islands. Its hilly configuration is the result of the island’s rocky cliffs, which are located mainly on the island’s north side and create a steep landscape.

The coastline is occasionally interspersed with flat areas known as fajãs (detritic fajãs and lavic fajãs), which are a distinctive feature of the island. The highlands of São Jorge are extremely windy and humid with high levels of rainfall and frequent fogs, even during the summer season. In combination with the island’s orographic features, this strong hydrological potential sustains large wetland areas of local and regional importance.

Approximately 9,000 inhabitants live on São Jorge Island, amounting to 3.5% of the Azorean population. As with the other islands in the Azores archipelago, São Jorge was uninhabited when discovered by the Portuguese. The current population is the result of settlement and mixing of different ethnic groups.

Agriculture permeates the island’s communities, but the main focus is livestock associated with São Jorge cheese production and fish processing to produce canned tuna. Both industries play an extremely important role in the island’s economy, due to the high number of people involved and the amount of revenue they generate. The tourism sector is also on the rise linked mainly to outdoor activities. The increasing number of visitors to the island is also driving development in other sectors such as accommodation, catering, handicrafts and entertainment.