El Hierro is a volcanic island which is the youngest and smallest of the whole Canary Archipelago. Situated in the Macaronesian biogeographical region, the island's vegetation is composed of coastal matorral, thermophilous juniper forest, evergreen woodlands and pine forest, as well as marine and coastal habitats. El Hierro has a great biological diversity, not only at the ecosystem level, but also at the species level. 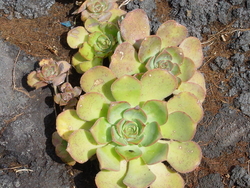 El Hierro is the most westerly and smallest island in the Canaries Archipelago. It has abrupt landforms with steep slopes and most of its coastline comprises cliffs. The mountains reach a maximum altitude of 1,501 m. The climate is conditioned by its proximity to the tropics and influenced by the trade winds that combined with the altitude give riseto various climatic zones, with rainfall ranging from 150mm in the southern coastal areas to 750 mm in the northern divide.

The distribution of the main ecosystems is staggered: coastal scrubland with succulent plants including different kinds of Spurge, thermophile forests of Spanish Juniper, evergreen Laurel forests together with Myrtle and Tree Heath and finally, the Canaries Pinegrove.

There are numerous endemic species of flora and fauna, among the latter the El Hierro giant lizard (Gallotia simonyi) that was thought to be extinct. However, recently residual populations have been found that have enabled its rehabilitation. Other endangered species are the White-tailed Laurel Pigeon (Paloma rabiche), the European Storm Petrel (Hydrobates pelagicus) and Bulwer’s Petrel (Bulweria bulwerii).

The wealth of marine life is exceptional and much visited by submarine divers from all over the world. 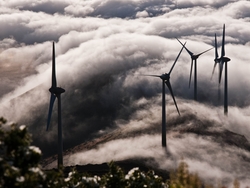 The island of El Hierro has approximately 11,000 inhabitants and agriculture and tourism are the main economic activities.

El Hierro set a new standard in sustainability in 2014. A hybrid hydro-wind electricity generation system made El Hierro the first energy self-sufficient island relying entirely on renewable energy sources. What makes El Hierro special is the combination of a wind farm with a hydraulic accumulation system that stores energy. When the wind stops blowing or energy demands are high, the stored energy in the hydroelectric plant can ensure the island a continuous power supply.