Situated at the coast of south-central Wales in the estuary of the Dyfi River, this biosphere reserve is representative of salt marshes and estuarine systems in the west of the United Kingdom. The estuary forms one of the most important wildfowl and shorebird centers in Wales and also comprises a Ramsar site.

Cors Fochno has a large expanse of primary raised mire and contains a high number of invertebrate species, including some of national and international importance. Upstream along the Dyfi Valley are remnants of native oak woodland. 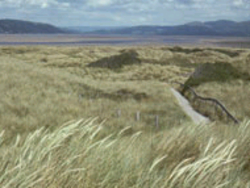 Broadleaf woodlands, typically sessile oak or ash dominated, are a feature of the valley slopes and its many tributaries, although conifer plantations now dominate large areas. The bryophyte, lichen and fern communities of the shady, damp valley woods are particularly notable, with large numbers of Atlantic species;

The Dyfi is a classic bar-built estuary, and one of the foremost examples of a drying, sandy, nutrient-poor estuary. Important populations of migratory fish, birds and otter occur along with extensive areas of saltmarsh (Atlantic salt meadow). The spit dune system of Ynyslas is an actively accreting system with good representation of dune community succession including marram fore-dunes and humid dune slacks.

The estuarine raised mire of Cors fochno is one of the largest and best preserved active raised bogs in UK. It is a key site for climate-related research and supports important assemblages of lower plants, invertebrates and birds.