Reserve Bayuvi dupki – Dzhindzhiritsa is one of the oldest protected areas in Bulgaria. It was declared a reserve back in 1934 to protect the natural old-growth forests of white fir and black spruce, which have an average age of about 250-300 years and also the great diversity of plant and animal species inhabiting these forests.

Bayuvi dupki - Dzhindzhiritsais located in Northern Pirin. Since 1979 it unifies the reserves Bayuvi doupki (established in 1934), Segmentepe (established in 1947) and Malka Dzhindiritsa (established in 1952), and the areas between them. The whole reserve belongs to Pirin National Park's territory and covers 2873 ha. Its upper border follows with little diversions the central mountain ridge from Pirin mount to Banski Suhodol mount; in some places the lower border reaches 1100 m alt. 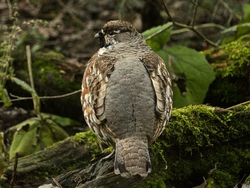 Situated on the northern slopes of the Pirin Mountain in southwestern Bulgaria, the Biosphere Reserve comprises a limestone landscape with lakes, waterfalls, caves and pine forests. It covers an area of 2858,5 hectares between 1300 and 2884 meters above sea level. The rugged mountains with some 70 glacial lakes are home to endemic and rare species, many of which are representative of the Balkan Pleistocene flora. Forests in the area are mainly coniferous and include the endemic Macedonian pine (Pinus peuce). Among the rare and endemic vascular plants are Aquilegia aurea, Gentiana lutea, Leontopodium alpinum and Papaver degenii. Threatened bird and mammal species in the area include for example brown bear (Ursus arctos), grey wolf (Canis lupus), marten (Martes martes, M. foina), golden eagle (Aquila chrysaetos), hazel grouse (Bonasa bonasia), and three-toed woodpecker (Picoides trydactilus).

The Biosphere Reserve is strict nature reserve (1st category protected territory according to Bulgarian legislation and IUCN classification) and only scientific research, education and passing through the reserve only on marked trails is allowed.

The grazing of livestock in the high part of Pirin National Park is a traditional activity, practiced for millennia. The mountain stock - breeding used to be a traditional means of living for part of the local population. On the other hand, the grazing is one of the essential factors for the formation of the specific high mountain habitats of: endemic, rare, threatened and relict species, subject to protection in the National park and in the European ecological network - Natura 2000. The high mountain part of the park is currently an important species formation centre.

Pirin National Park is famous tourist site. The existing visitor interest in the park is justified by the great potential the park territory provides together with the adjacent territories.