The biosphere reserve is located in the Gulf of Cadiz and represents one of the most important protected area in Spain. The core area is made up of the Doñana National Park . The importance of Doñana is based on the ecosystem variety it hosts and the high number of species that it represents. 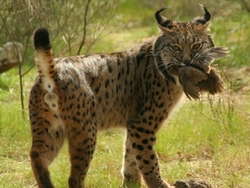 This is one of the most important areas of wetlands in the world and covers diverse landscape units.

The coastal strip includes virgin beaches and chains of both static and migrating dunes, alternating with forests of centenary pine trees and complex lagoon systems interconnected by the water-table, enormous estuary areas and marshlands influenced by tides; seasonally flooded grasslands such as the scrubland plains, forests of age-old Cork Elms convertedinto grasslands, the so-called “white mountain”areas with a predominance of Rockrose, Thyme and Rosemary and the “black mountain” area where the dark colour of the heather abounds.

However the most interesting point is the extraordinary wealth of fauna that makes Doñana a unique enclave where over 300 species of vertebrates have been identified. It is estimated that some 6 million birds pass through the Reserve annually on their migratory flyways, due to its strategic location between Europe and Africa. Furthermore, Doñana is one of the last refuges for endangered species such as the Iberian Lynx orthe Spanish Imperial Eagle. 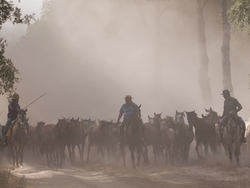 Its landscapes of marshes and sand and the dynamism experienced by the Guadalquivir estuary with the seasonal changes are closely linked to the ancestral relationship between man and nature, giving rise to a secular socio-economic structure where activities such as agriculture, livestock, fishing and hunting are combined with the use of the mountains to obtain wood and derivatives, aromatic and medicinal herbs, honey and wax, etc.

In the work of the Doñana Biosphere Reserve towards sustainability, the most traditional activities are promoted and modernized, while ensuring an increasingly technical management of agriculture and the practice of a respectful tourism. In order to achieve this objective, coordinated work is carried out between the population and the management team of the biosphere reserve.