Desnianskyi Biosphere Reserve located in middle stream of the Desna River (one of the biggest branches of the Dnipro River) in the Eastern Polesie Region and presents the basic landscape types of the east of the Polesie Lowland: rivers, lakes, floodplains, bogs, transition mires, fens, real, peaty and swampy grasslands, pine, broad-leaf and mixed forests, including floodplains. 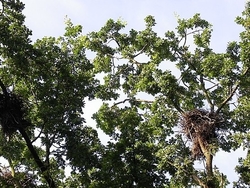 Within the area preservation of landscapes, ecosystems, species and genetic diversity, which are characteristic for the Eastern Polesie Region. The territory is important for conservation of floodplain natural complexes in the basin of the
and pine and oak–pine forests.

Flora consists of more than 800 species of vascular plants, and dendroflora consists of more than 60% of all species of trees of the Eastern Polesie Region. There are 20 species from the Red Book of Ukraine. 90 species of 340 species of fauna of vertebrates are protected, in particular 11 species belong to the European Red List, 34 species belong to the Red Book of IUCN, and 39 species are included into The Red Book of Ukraine. On the territory of the reserve black stork (Ciconia nigra), grey crane (Grus grus), short-toed eagle (Circaetus gallicus), lesser spotted eagle (
pomarina), booted eagle (Hieraaetus pennatus), capercaillie (Tetrao urogallus), tengmalm's (Aegolius funereus), pygmy owl (Glaucidium passerinum) nest. Corncrake (Crex crex) which an endangered species on the global level is quite common. Besides, ways of migration for a number of birds such as geese, ducks, sand-pipers, Gulls and animals such as bears and lynxes are located on this territory. 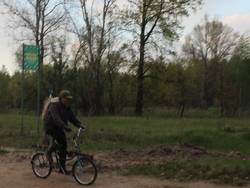 The main fields of economy are agriculture, forestry, recreation, fishery, and sport hunting. The low density of population, especially on the left bank of the Dnieper River, the low level of pollution of the region, picturesque and wide floodplains of the Desna, large massifs of forests with wildgrowing berries give the possibility to develop recreation and tourism. Sustainable development will be ensured by means of rational use of natural resources, in particular timber, fishery and hunting resources, support of the development of recreation and green tourism (especially in the region of the Desna River), support of the traditional resource using (organic agriculture, gathering berries and mushrooms, willow braiding), implementation of leading environmentally sound technologies in agriculture, and development of social sphere in the transition and buffer zones.

The Biosphere reserve will ensure integrated approach to the protection and conservation of the nature, traditional and rational use of natural resources, and development of recreation, national and international tourism. This will give the possibility to guarantee sustainable social and economic development of the Novgorod-Siverskyi and Seredyno-Budskyi administrated raions (districts) and Sumska Oblast (Province) in the whole.