Denali Biosphere Reserve and National Park is situated in south-central Alaska centered on the Alaska Range which separates the coastal lowland from the interior. Denali comprises Mount McKinley, the highest peak in North America towering 4,800 meters above the surrounding landscape as well as Denali fault system, the largest crustal break in North America.

The landscapes and ecosystems of Denali National Park and Preserve are influenced by geological history, earth movements, climate, the advance and retreat of glaciers, permafrost, wildland fire, and water flow.

One of the major influences on Denali’s ecosystems is the Alaska Range, the massive wall of rock, glacial ice, and snow running from southwest to northeast across the Park’s 2.4 million hectares.

It towers above and separates the Kuskokwim and Tanana river basins to the north from the Susitna River lowlands to the south. This mountain barrier creates two major climate zones in the Park and dramatic elevation differences. 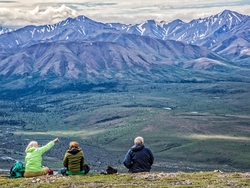 Resource management activities. Research, including inventory and monitoring of resources