The Po Delta Biosphere Reserve is a delta plain located in northern Italy, produced by the actions of the River Po and recent human activities. It is created by the confluence of the main branches of the river, and comprises coastal dune systems and sand formations, lagoons, fishing ponds, marshes, fossil dunes, canals and coastal pine forests, vast brackish wetlands and cultivated lands dominated by rice farming. These landscapes provide the area with a unique identity and a high level of biodiversity due to the extensive range of habitats.

The reserve is an important tourist destination, and tourism together with agriculture and fish farming constitute the main economic activity of local communities. 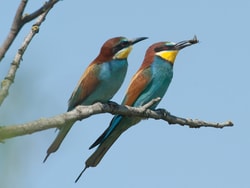 The Po Delta is the only delta in Italy and comprises the largest national reserve of wetlands, whose waters flow through ancient coastal dunes before meeting the sea. The delta plays a major role in conservation due to the diversity of environments, which include river branches, a dense secondary hydrographic network, coastal dune systems and sand formations, sandbars, lagoons, fishing ponds, marshes, fossil dunes, canals and coastal pine forests, in addition to the vast and mainly brackish wetlands.

The Po Delta hosts over 360 species of birds including the purple heron (Ardea purpurea), spoonbill (Platalea leucorodia), glossy ibis (Plegadis falcinellus), little egret (Egretta garzetta) and a colony of pink flamingos (Phoenicoparrus roseus) which number over 10,000. The Cervo della Mesola is the only mammal to be found in the reserve — a red deer (Cervus elaphus) recognized as genetically distinct from other populations in Europe. 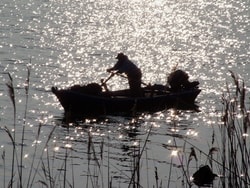 The Po Delta is home to approximately 118,000 inhabitants. The reserve is located near four major settlements less than 100 km away: Rovigo, Ferrara, Venice and Ravenna. It is also an important tourist destination, and tourism together with agriculture and fish farming constitute the main economic activity of local communities.

The reserve contains many sites of historical and cultural value. San Basilio is an ancient settlement near the village of Ariano nel Polesine, which in Roman times functioned as a trading port. The Abate Tower in the municipality of Mesola is one of the most interesting hydraulic structures of the Po Delta, while Pomposa Abbey in the municipality of Codigoro is a masterpiece in the Romanesque and Byzantine style with its characteristic bell tower. Lastly, the area includes a number of seventeenth-century Venetian villas spread throughout the territory.